The United Nations continues to be a place where Jew-hatred flourishes and sadly New Zealand has played a role in propping up antisemitic organs of the UN and supporting anti-Israel resolutions. 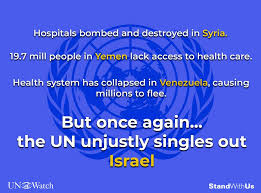 And there is Jew-hatred in the United Nations – the actions of the global body have made the annual top 10 list of antisemitic incidents as enumerated by the Simon Wiesenthal Center for 2018.  In 2017, the UN ranked number five on the list, behind genocidal sermons from North American Imams, and it remained in fifth place in 2018.  The 2017 fifth-place spot was not for the UN in general, but was focused on UNRWA.

New Zealand has been a staunch supporter of UNRWA.  In 2018, the New Zealand government increased funding to UNRWA and has continued to remain silent on the corruption and antisemitism within the organisation; essentially rewarding antisemitism, if not implicitly endorsing it. New Zealand also consistently votes for the four recurring resolutions that praise UNRWA at the UNGA (numbers 7, 8, 9, and 16 in the IINZ analysis).

And New Zealand has a shamefully strong record in recent years of not opposing any of the anti-Israel resolutions put forward at the United Nations general assembly.  Each year there are nineteen resolutions that single out Israel routinely and usually an extra one or two in addition.  In the past two years at least, no other country has been singled out more than once and only six other countries in total have been targeted by United Nations General Assembly (UNGA).

Furthermore, Prime Minister Ardern has talked of wanting reform at the UN and singled out the Security Council veto. However, no New Zealand Minister has mentioned the clear bias against Israel at the world body.  With thirty-two Arab/Islamic nations at the UN not recognising Israel as a legitimate state and with many others joining the disproportionate criticism, it falls to the few democratic nations around the table to stand up to the bullies. Yet New Zealand has remained silent.

The Ministry of Foreign Affairs and Trade advice reflected this in their key points on Middle East-related issues, writing that

“New Zealand has for many years endeavoured to take a balanced and even-handed approach to Middle-East issues in the UN, with the primary objective of supporting a sustainable two state solution, best achieved through direct Israeli-Palestinian negotiations.” MFAT

However, it is hard to see how the rhetoric of “balance” is manifest in reality.  In 2017 and 2018, New Zealand abstained on four of the nineteen recurring anti-Israel resolutions and voted a

Winston Peters gave an interview in 2017 in which he said UNSC 2334, that New Zealand co-sponsored with Malaysia, Senegal, and Venezuela in 2016, was “something that happened a long time ago – about one year ago now – so it’s really academic.”   However, seven of the 19 resolutions (37%; numbers 3, 5, 11, 12, 13, 15, and 17 in the IINZ analysis) referred to UNSC 2334. Backtracking on his 2017 statement, Rt Hon Minister Peters replied to The Israel Institute of New Zealand saying “It is standard practice for United Nations resolutions to refer to previous resolutions.  The adoption of United Nations Security Council Resolution 2334 took place before my appointment as Minister of Foreign Affairs…”.

New Zealand’s record of supporting anti-Israel resolutions show the claims about balance, even handedness, and being an “honest broker” to be false.

The Israel Institute of New Zealand is an independent think tank dedicated to providing New Zealanders with a better understanding of the State of Israel through accurate analysis, insightful commentary, and effective advocacy.