A great many things have to come together over the next couple of months before we can say definitively that the political situation in Israel is really good.

But I now feel a modest optimism that eluded me when last I wrote.

“Modest,” because we never know what’s waiting for us around the bend, but there is hope.

A handful of factors have contributed to this shift, beginning with the results of the Likud primary. The top slots on the list have gone to good people who are actually to the right of Netanyahu.

Knesset Speaker Yuli Edelstein came in first, (after Netanyahu at the top).

A man of courage, he was a refusnik in the USSR sentenced to hard labor in Siberia for teaching Hebrew.

Instrumental in promoting a 2017 Likud Central Committee resolution to apply sovereignty to parts of Judaea and Samaria and allow unlimited building in the settlements, he said:

“We must declare clearly that the era of evacuations and giving up land is over.”

The second slot has gone to Yisrael Katz, who currently serves as Minister of Transportation and Minister of Intelligence – sitting on the Security Cabinet by virtue of that role. Katz similarly promoted that Likud Central Committee resolution to apply sovereignty to parts of Judaea and Samaria.

Following Katz is Gilad Erdan, who serves as Minister of Public Security, Strategic Affairs and Information – and also sits on the Security Cabinet. Among his responsibilities is combatting BDS.

Erdan joined with Katz and Edelstein in speaking out in support of that Likud Central Committee resolution.

Fourth on the list is Gideon Sa’ar. He has held a number of positions over the years – including Minister of the Interior and Minister of Education, and is returning now after a hiatus of more than four years.

He is solidly right wing: he worked strongly against the expulsion in Gush Katif, and as Education Minister instituted school trips to Hevron for the first time so the children could learn of their national heritage.

As to the 2017 meeting of the Likud Central Committee, at which the resolution on applying sovereignty was passed, Sa’ar was the keynote speaker:

“Our task is to remove any question mark that remains over the future of the settlement movement.”

When he was last in the Knesset, he held the slot on the list immediately below Netanyahu and was considered by the prime minister to be a major political rival. As I wrote last, Netanyahu sought to diminish his political strength in this primary. I prefer not to deal in the specifics of Netanyahu’s charges, to which I do not give much credence.

The prime minister counts the fact that Sa’ar did not come in first on the list as a political victory, but I, and many others, see Sa’ar’s ability to achieve the fourth slot in the face of the accusations against him to be a measure of his political strength. He is up and coming.

You can see the slate for Likud, as determined by the primary, here:

It is exceedingly important that Likud win the election – as only this party is strong enough to assure that the government has a right-wing tilt (how right depending on the nature of the coalition). This means Binyamin Netanyahu as prime minister (unless or until his legal troubles intervene). But what seems clear from the view here is that the time for his retirement approaches. Domestically, he has lost some of his political vigor, his aura of invincibleness. In short order we will need to track what’s next.

And Gantz? The glow of his maiden political speech has now dissipated. In fact, he has developed a case of foot in mouth disease.

Gantz gave an interview with Shlomo Artzi that ran in Yediot Ahronot. When the matter of the expulsion of Jews from Gush Katif was raised, Gantz was asked if the uprooting of Jews saddened him. His reply:

“…it was a legal action; it was approved by the government of Israel and carried out by the IDF and the settlers, with great pain but done very well…

“…we have to take its lessons and implement them in other places.”

Israel Resilience Campaign officials subsequently tried to walk this back, saying Gantz was not advocating further evacuations of Jews, but talking about other ways to implement the lessons of Gush Katif.

They had a difficult time making their case. For, Gantz also said that peace with the Palestinian Arabs “must ensure Israel is secure,” but that “we have to find a path which leaves us not controlling other people.”

In the end, what Gantz meant is likely less significant than what he was perceived as meaning. JPost political analyst Gil Hoffman asked, “Did Israel Resilience just lose the race?” 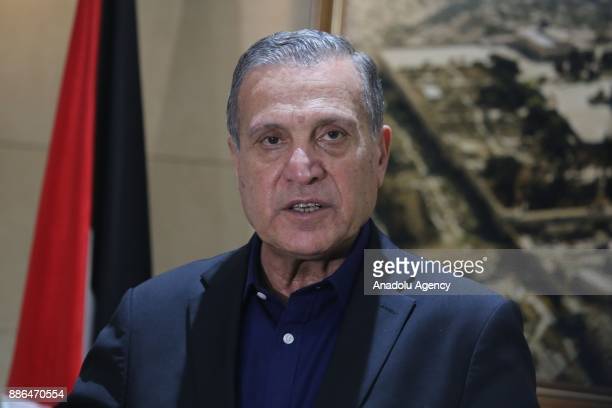 To top it off, Abbas’s spokesman Nabil Abu Rudeineh (pictured), offered words of praise for this statement:

“…the signs coming from Gantz about settlements,” he said, were a step in the right direction should he win the election and prove “willing and ready” for peace. “It’s encouraging if he succeeds and he sticks to this opinion.”

Meanwhile, Abbas offered his own comments:

“I hope whoever wins the upcoming elections in Israel will want peace, love peace and reach out for peace. We have been reaching out for peace for a long time.” (Emphasis added)

This hypocrisy is beyond insufferable. “Reaching out for peace” according to Abbas, undoubtedly means finding an Israeli government that will concede on just about everything.

I am not implying that Gantz would concede on everything. But his tilt to the left, which makes him more palatable to the Palestinian Arabs, will not play well with much of the Israeli electorate.

Netanyahu wasted no time in responding to this, saying on Wednesday (emphasis added):

“I am very pleased that the Likud members have chosen, in a precise and democratic way, a strong, impressive list that is good for Israel…

“But the trouble is that [Abbas] is also pleased, because Benny Gantz said today that he will carry out a second disengagement in Judea and Samaria and [Abbas] wished him success in the elections.

Then Naftali Bennett, chair of the New Right, got into the act (emphasis added):

“The Israeli public will not again support someone who proposes evacuating Jews from their homes, even if he does so humanely and with sensitivity.

“After the elections, when the ‘Deal of the Century’ for the establishment of a Palestinian state comes, only one thing will be the deciding factor: Will this be a ‘BibiGantz’ government or a ‘BibiBennett’ government?

“Only a strong New Right will prevent the establishment of a Palestinian state.”

This is Bennett’s theme: Electing Likud is not sufficient. There must be a strong right wing bloc that Netanyahu will find it necessary to draw upon to form his coalition. And, needless to say, Bennett is seeking to be strong enough to demand the position of Defense Minister. (I suspect he would be a very good one, and we cannot fault him for trying, but he should not hold his breath.)

So, we’re off and running!

As to the merger of the Israel Resilience Party and Yesh Atid, chaired by Yair Lapid, matters are not going smoothly. Lapid is being true to form as he pushes for good terms in the arrangements. He will not agree to an alternating chairmanship. Why alternate when Lapid can be in charge?

And then there is the matter of the makeup of the joint list. Pointing to the generous terms Gantz gave Ya’alon, he insists his party should receive as much.

Much more after Shabbat!

Previous Israeli election not about policies but about who is suitable to lead. Opinion piece Feb. 2019.
Next Into the fray: Unilateral concessions: The latent agenda for the April elections.