Delegates at the party’s conference in Liverpool voted to criticize Israel’s use of force against violent protests and riots on the Gaza border, urge more UK funding for the UN agency for Palestinians, and back a freeze on British arms sales to Israel.   ( Times of Israel and AP staff)

The British, in general, have rarely been friends to the Jewish people and it is hard to know just what they want from our lives even as it is becoming less and less clear why we would should even care. Labour is threatening to halt UK weapons sales to Israel because our brothers and sisters dare to defend themselves against those who want us dead.

Not only does Hamas and the other Islamist organizations surrounding Israel — not to mention the Palestinian Authority — want us gone but they want us gone from the homeland our fathers.

It is a remarkable stand for Labour to take within living memory of the Holocaust.

Many of these people, to this day, probably still believe that the recent attacks on the Gaza border represent “peaceful protest.” They must feel that the burning of Jewish crops and the killing of innocent creatures on animal preserves with those incendiary balloons — that continues to this day — are fully justified.

It is astonishing. There is all sorts of footage of violence and chaos and mayhem and blood coming from Arabs who live on Jewish land directed toward Jews, yet the progressive-left and the Labour Party honestly believe that we deserve whatever beating that we get.

I believe that this needs to be understood within the context of the long-standing European and Arab abhorrence to Jewish self-defense. For millennia the very notion of a Jew punching back was anathema within Europe and throughout the lands conquered via Arab and Muslim imperialism.

What is ironic and sad is Labour honestly does not recognize Judea as Jewish land.

They seem to believe that Israel is somehow part of the Arabian Peninsula and that, therefore, Jews need to be confronted for our usurpation of the land of others and the persecution of the innocent, bunny-like “indigenous Arab” population.

They do not recognize the indigeneity of the Jewish people to Israel even as they claim to stand for the rights of other indigenous peoples. 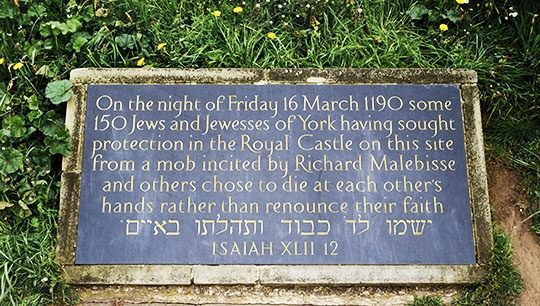 In 1190 there was the massacre of the Jews at York which took 150 of us, some taking their own lives during the bloody chaos and others burned in the tower.

In the year 1290 King Edward the First issued the Edict of Expulsion to the Jewish people living within England. The edict remained in force until Oliver Cromwell dropped by the British political scene in 1657.

There is even a delightful 2011 story from the BBC of all places that notes:

The remains of 17 bodies found at the bottom of a medieval well in England could have been victims of persecution, new evidence has suggested.

The most likely explanation is that those down the well were Jewish and were probably murdered or forced to commit suicide, according to scientists who used a combination of DNA analysis, carbon dating and bone chemical studies in their investigation.

Is there an actual difference between being murdered versus forced to commit suicide?

But these little acts of anti-Jewish malice are insignificant compared to British behavior during the Holocaust in which they refused Jewish escape from Germany and Poland even as the ovens were firing.

The Brits issued the “White Paper” of 1939 that kept us away from our family in Israel even as the Nazis were rifling us down or gassing our grandparents.

And now the Labour Party is standing with Hamas and the PLO and thus want to halt weapons sales to Israel.

That is A-OK with me.

Why does Israel need to purchase weaponry? Would it not help the Israeli economy to replace British manufacturing with Israeli manufacturing? My guess is that Israel has all the expertise and resources necessary to fill the gap. The more independent Israel is, the better for everyone.

The Jews of the Middle East, in my opinion, do not even need the 3 billion dollars in annual aid that the United States gives to American weapons manufacturers. This hardware comes with strings.

I do not want to say that we are in this fight alone, but we may need to think of “the conflict” in precisely those terms.

The lurking menace of recrudescent Nazism