Yes, my friends, I am here. Working hard on another writing project, and laboring mightily to make sense of the news.

Did you ever stand on the side of a highway, with the cars whizzing past? Hard to not feel a bit dazed.

In recent days, I have been watching news events that create the same sensation.   A great many tentative reports, sometimes conflicting, are being issued in rapid succession – one after the other. Very often, nothing to grab on to, in order to say: Ah ha, this is what is happening.

But here I am.  And I’m trying not to blink.

I want to start with that so-called “ceasefire.”

Last Friday, Defense Minister Lieberman (center in picture , during a visit to a community near Gaza) said that he has “nothing to do” with ceasefire negotiations with Hamas…I don’t believe in it.  The only accord is the reality on the ground.”

But then he said:

“The only thing we’re saying through the Egyptians and through others and they understand this [is] there will be no movement and no new agreements…until there is a solution on the captives and missing persons.”

Ah, then there is communication with Hamas indirectly, and he does believe in a deal under the right circumstances?

On Sunday, Chief of Staff Gadi Eisenkot (center) visited troops stationed near the Gaza border “amid elevated tensions” and pronounced himself satisfied with the “professional” and “responsible” way that the troops are handling themselves.  He declared Israel ready for any possible escalation with Hamas.

Is this a message to Hamas? Or is this intended to ease the anxiety of Israeli residents in the area?

Meanwhile, reports continue to filter in regarding “progress” on that ceasefire.  There is considerable mention of PA involvement – including with regard to sanctions the PA still has levied on Hamas in order to secure involvement.  Actually, a Hamas statement was released saying that Israel was responsible for this situation and “would pay a price” if those sanctions weren’t lifted.

The PA, of course, is seething about being cut out of the ceasefire negotiations, such as they may be.  The fear in Ramallah is that Hamas will be officially recognized as being in control in Gaza – when the reality is that Hamas wrested Gaza from the PA illegally.  The Oslo Accords had assigned Gaza to the jurisdiction of the PA, at least for the interim until there were “final status negotiations.”

The PA’s Mahmoud Abbas has said,

“A cease-fire and an agreement for calm between Israel and Hamas will be over my dead body.”  (Is this a threat or a promise?)

Other senior PA officials have declared that any “ceasefire” put into place without the consent of the PA is not legal and is “considered treason.”

According to Al Quds, the Palestinian Authority has submitted its own list of demands for a “ceasefire.”  Before there can be an agreement with Israel or reconstruction in Gaza, they say, there must be reconciliation between Hamas and the PA, with agreement between the two parties on how to run Gaza.

Egypt seems to be taking this seriously.  Further work on the “ceasefire” was reportedly put on hold today: The Egyptians want to give “reconciliation” a chance before proceeding further with regard to indirect talks between Israel and Hamas.

Odds of a genuine Fatah-Hamas “reconciliation” are slight.  There is a history of numerous such attempts which have all failed; there is simply too much animosity between the parties.

In any event, such a “reconciliation” would not be in Israel’s best interest.  It serves us better when they are at each other rather than calling for a state under a united banner.

Hamas, I note, wants the PA to end security cooperation with Israel as a step towards
reconciliation. 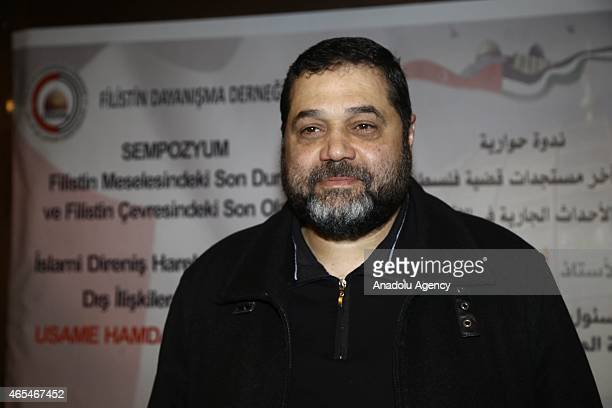 Here, from the mouth of Hamas foreign relations chief Osama Hamdan we have the truth about the dangers of a “long-term ceasefire”:

Even if a deal were reached, he said, Hamas would continue to “build its capabilities…”

This would be a hudna, not a genuine ceasefire as a first step towards peace.  Which is what opponents of that “ceasefire” have been saying all along.

The PA is furious – livid, outraged — at present for reasons that go well beyond the Hamas negotiations:  Actions by the Trump administration have seriously riled PA leaders.

The US cut in funds to UNRWA is already a reality: the announcement that $250 million was being withheld was made at the beginning of 2018.

Now it is a reality as well that the US is going be cutting more than $2 million from its assistance to the PA.  This decision was made after a review of US assistance to the PA that was ordered by the president.  These funds will be directed to other high priority projects.

Add to this an unofficial report – not directly from US officials – indicating that the Trump administration is about to announce a policy “that essentially cancels the ‘right of return.’”

To be sure, the US, unilaterally, cannot “cancel” a policy advanced by UNRWA and Arab nations.  But by acknowledging only 500,000 true refugees, as compared with the five million UNRWA claims exist, it will severely undercut what UNRWA is doing.

The alleged “right of return,” which in fact does not exist, is UNRWA’s very raison d’être. It has done some very fancy footwork to inflate the number of refugees.

Jared Kushner, head of the negotiating team, is said to be responsible for this anticipated switch in US policy.  For this I salute him.

I have perceived him (do perceive him) as naïve in many regards, but, if reports are accurate, he sure has this right.

Trump and his team are challenging the political status quo – really shaking things up.  Whether this approach will end up being phenomenal or a huge failure remains to be seen.

For a bit more on the issue of “right of return,” see this from my website:

It was reported (from a secondary source) the other day that President Trump would be unveiling his “peace plan” when he gave a talk at the opening of the UN General Assembly in September.

This was followed not long after by a second report indicating that because of the situation (PA hostility?), only an outline would be introduced.

We will have to wait and see.

Interest in what will happen with that “peace plan” was stimulated by a remark that Trump made a week ago:

That was an “uh oh” kind of statement. But National Security Adviser John Bolton was here when this was said, and he provided another take: He was not seeing any change in US policy, he said, and “it’s not an issue of quid pro quo.”

I can buy this, because I remember that Trump suggested as much when the US recognition of Jerusalem as Israel’s capital was announced.  It was the right thing to do, the president said, and he wasn’t planning to demand anything in return.

What the president was saying now, explained his advisors, is that after Israel had this fantastic achievement the PLO would be demanding something big, something commensurate.  That is the way a deal-maker thinks.  In fact, said Bolton, the president was surprised that the Palestinian Arabs marched off in a huff instead of say, “OK, now this is what we want.”

Because of a considerable reduction in violence at the fence, we have been told, the Erez Crossing for pedestrians, which was closed last week, would now be opened again.

According to Haaretz, the closing was merely symbolic anyway and had no impact on the people of Gaza:  It is estimated that about 60% of those seeking entry into Israel were patients coming for medical treatment, who were not stopped, while another 30% of those wanting to cross were diplomats, journalists and others who were permitted through.

I guess I must be very dense, because it is not clear to me at all what was gained with this symbolic closure.

As we are speaking about crossing into Israel from Gaza:  Last night Israel refused to let three women from Gaza who are close family members of Hamas terrorists into Israel to secure treatment at Arab –run hospitals in Jerusalem.  The goal was to pressure Hamas into releasing the bodies of our two soldiers and two Israeli civilians.

Today our High Court ruled that this contravened Israel’s humanitarian obligations and they had to be let in.

This too we must contend with.

Right on to Deputy Defense Minister Eliyahu Ben-Dahan (Habayit Hayehudi) who said that if the High Court continues in this direction, we will have to place restrictions on their authority via legislation.  Whether this is viable or not, I appreciate the sentiment.

But let’s end with a smile.  Friday was dog celebration day in Tel Aviv, which is a city in love with its dogs:

Previous New Zealand Parliamentary Friends of Israel Launched.
Next Straight talk from the Heart of Ramallah.