From Israel: No Time to be Weary.

The situation at the Gaza fence does tend to make one feel weary, but in fact great vigilance is still needed.

What is going on is not an existential threat for the nation. But this does not mean we should shrug our shoulders and treat it lightly. Regional Cooperation Minister Tzachi Hanegbi (Likud) has said that

“I’m not excited by the kite terrorism. It shows how pathetic they are…we’ll find a solution.”

He wishes, I am certain, to demonstrate to the Palestinian Arabs at the fence that they are not intimidating us. Fair enough. But we must persist in taking a strong stand against their vile and unacceptable actions. And, as you will see below, I think perhaps that is beginning to happen now.

“they found a weapon that does not endanger human lives…”

But this is not the case any longer, as there have been a number of instances in which explosive devices have been attached to large helium balloons. The first one sent out some days ago landed without causing problems. Some have been shot down by the IDF. On Friday, one apparently exploded mid-air.

This new approach increases the importance of stopping the fence terrorists. Their goal is to sail the balloons with explosive devices over IDF soldiers and then detonate them remotely. Until now, focus has been on taking down the kites and balloons, most often using drones. Now, for the first time, warning shots have been fired at those doing the launching.

This past Friday – the 10th Friday of Hamas riots – was “Al Quds Day” and considerable violence was anticipated at the fence. 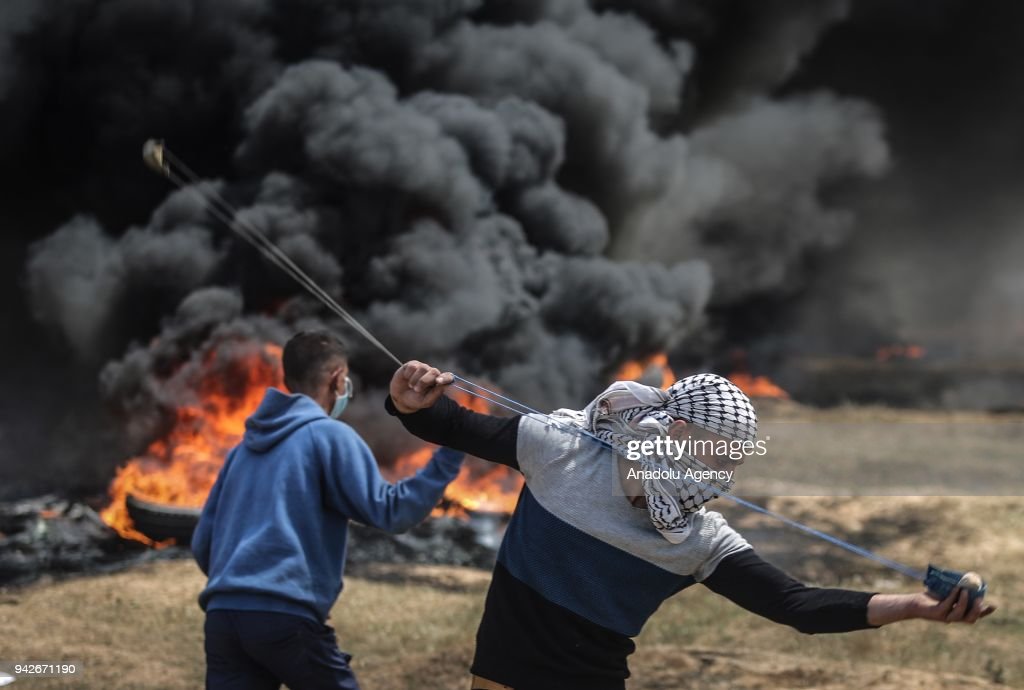 And indeed, the violence was considerable at five different points along the fence, with explosives thrown and attempts to break through the fence. In all, four Gazans were killed in clashes.

But in the end, barely 10,000 came out. This was a failure for Hamas – which was not only unable to bring out the huge crowds it had predicted, but also failed to ignite the Arabs in Judea and Samaria.

This is supposed to be the last demonstration at the fence, as this was the last Friday of Ramadan. We’ll see.

I found the description by Ron Ben Yishai as to what he saw at the fence on Friday encouraging. As he tells it, the IDF has learned important lessons (emphasis added).

“On an earth mound facing the fence, some 150-200 meters away, the IDF’s snipers were lying in wait, watching what was happening motionless…

“This time, the earth mounds located 20 meters from the fence were also populated by large camera crews from the Combat Intelligence Collection Corps and the IDF Spokesman’s Unit. This time, the army was determined not just to prevent the crossing of the border, but to also show the protesters up close…

“Maj. Gen. Eyal Zamir, who planned the troops’ deployment before vacating his office this week, drew the right conclusions from Nakba Day— this time the forces were out in large numbers, clearly seen on the other side. There’s no doubt this had a deterring effect. There were also more kites shot down using drones than before. The fields around us were filled with dozens, if not hundreds, of kites that crash-landed there.

One does feel less weary, reading this.

“The Z’vun Ha’Eish (Firefly) drone weighs about three kilograms (about six and a half pounds) and is capable of remaining in flight for up to 15 minutes armed with a warhead of up to 350 grams before crashing and exploding into an enemy target. It can also be flown into moving airborne targets as well as into the window of an enemy building and detonated within the structure.

“Separately assembled warheads can also be used as observation posts hovering for up to 30 minutes, allowing a commander to see what’s happening without sacrificing soldiers. An electric engine keeps the sound of the drone silent, enabling it to approach its target with stealth.”

There had been talk in recent days of Israel providing humanitarian relief to Gaza, to prevent a collapse of the society, which is being predicted.

I was relieved to read this morning that after the Security Cabinet met to discuss this, no decision about providing relief was made. It is for me a source of bewilderment that Chief of Staff Maj. Gen. Gadi Eizenkot is said to have been among the promoters of this relief, saying that it was a security issue for Israel.

This makes sense only if the humanitarian crisis is the cause of the violence, and my understanding is quite the contrary.

“No cliché has dominated the discourse on the Gaza situation more than the perception of Palestinian violence as a corollary of the Strip’s dire economic condition. No sooner had Hamas and Israel been locked in yet another armed confrontation over the past weeks than the media, foreign policy experts and politicians throughout the world urged the immediate rehabilitation of Gaza as panacea to its endemic propensity for violence. Even senior members of the Israel Defense Forces opined that a ‘nonmilitary process’ of humanitarian aid could produce a major change in the Gaza situation.

“While there is no denying the argument’s widespread appeal, there is also no way around the fact that it is not only completely unfounded but the inverse of the truth. For it is not Gaza’s economic malaise that has precipitated Palestinian violence; rather, it is the endemic violence that has caused the Strip’s humanitarian crisis.

“For one thing, countless nations and groups in today’s world endure far harsher socioeconomic or political conditions than the Palestinians, yet none have embraced violence and terrorism against their neighbors with such alacrity and on such a massive scale.

“For another thing, there is no causal relationship between economic hardship and mass violence. On the contrary, in the modern world it is not the poor and the oppressed who have carried out the worst acts of terrorism and violence but, rather, the militant vanguards from among the better educated and more moneyed circles of society, be they homegrown terrorist groups in the West or their Middle Eastern counterparts…

“Nor has Hamas been an exception to this rule. Not only has its leadership been highly educated, but it has gone to great lengths to educate its followers, notably through the takeover of the Islamic University in Gaza and its transformation into a hothouse for indoctrinating generations of militants and terrorists.”

Not only is it a futile approach, the notion that Israel should assume responsibility for the condition of the residents of Gaza, when Hamas is so clearly responsible, rubs badly. The PA also has responsibility, as it has declined to pay salaries it is obligated to pay, and has cut off payments for electricity in Gaza.

Martin Sherman – in “the humanitarian ‘hoax’” – points out that Gazans repeatedly destroyed the Kerem Shalom crossing, which supplies gas and fuel for the people of Gaza.

Clearly, the destructive, violent impulse of the people took precedence over their basic humanitarian needs.

And today a report was released indicating that analysts believe the helium for the lethal balloons that carry explosives is very likely supplied by hospitals, as there are very few other potential sources.

I am grateful that Defense Minister Avigdor Lieberman (Yisrael Beitenu) was opposed to the idea of the humanitarian aid, as was Education Minister Naftali Bennett (Chair, Habayit Hayehudi).

“In the last few days we have been talking a lot about humanitarian measures for the Gaza Strip. We have to remember that our sons, both bodies of soldiers and citizens of Israel, are in the hands of Hamas in Gaza, so the formula I will be promoting is: humanitarian aid for humanitarian aid, and without free lunches.

“On the other side is a cruel enemy waiting for…free gifts from our side. We should not give gifts for free. Humanitarian aid in exchange for humanitarian aid. “

That is the position of the Security Cabinet right now, may it hold tight.

Fervently do I hope that we can now turn to other important issues in coming posts. Here I touch briefly on a few news items:

An 18 year old young woman was stabbed multiple times by a Palestinian Arab terrorist at about noon today, Monday, outside of a coffee shop in Afula, in the north. She is in stable but serious condition; her assailant, who is from Jenin, was shot in the leg and is in custody.

“The Israeli Air Force held a joint exercise with the Greek Air Force over Greece last Thursday, which included 40 Israeli fighter jets from ten squadrons, including refueling and transport aircraft and dozens of air crews, the IDF Spokesperson reported Monday. The training exercise was executed entirely in the air, without landing, and included two daylight sorties…

“My squadron took part, along with the entire Air Force, in training that went far away from home to unfamiliar territory, to carry out a precise and defined mission under very challenging conditions.

“…Our ability to take all our units and fly a great distance, perform a task and return, is substantial, and we are ready to carry it out whenever we are so ordered.” (Emphasis added)

US Ambassador to Israel David Friedman has been called back to Washington DC for urgent discussions on the “peace plan.” He will be meeting with State Department and White House officials – I assume most significantly with Jared Kushner, who heads the peace negotiations team, and Envoy Jason Greenblatt.

It seemed to me a strange time, with President Trump away in Singapore for the summit with North Korean leader Kim Jong-un tomorrow. Despite all of the predictions, I don’t think that anyone really knows how that will go. Perhaps (my guess only), if the president is successful in Singapore, he plans to immediately unveil his “peace plan” while there is an international spirit of euphoria.

Rudy Giuliani was in Israel last week. Serving now as the personal lawyer to President Trump, he has no authority to speak for the government. I admired his forthright gutsiness in 2001, after 9/11, when he was mayor of New York City, and he hasn’t changed.

In remarks to the JPost, he said that the PA was a “renegade group” of “terrorists and thieves.”

He explained that except for some

“left-wing political contingents, no one in the US has any use for the Palestinian Authority. We are aware of the fact that they pay salaries to convicted terrorists, including people convicted of killing Americans. That is totally mind-boggling.” (Emphasis added)

My hero! He tells the truth.