Don’t tell me to “stay safe”

On May 8th Trump pulled out of the disastrous Iran Deal. Almost immediately afterward Israeli citizens were warned that there would likely be an attack from Iranians based in Syria and communities in the Golan were instructed to make sure their bomb shelters were open.

And they did attack, shooting 20 large missiles at Israel. Thankfully not a single one hit their target and instead the IAF wiped out much of the Iranian infrastructure in Syria in the largest operation in Syria in 40 years. The perfection of the military maneuver, brilliantly timed with the preceding diplomatic efforts was nothing short of stunning. 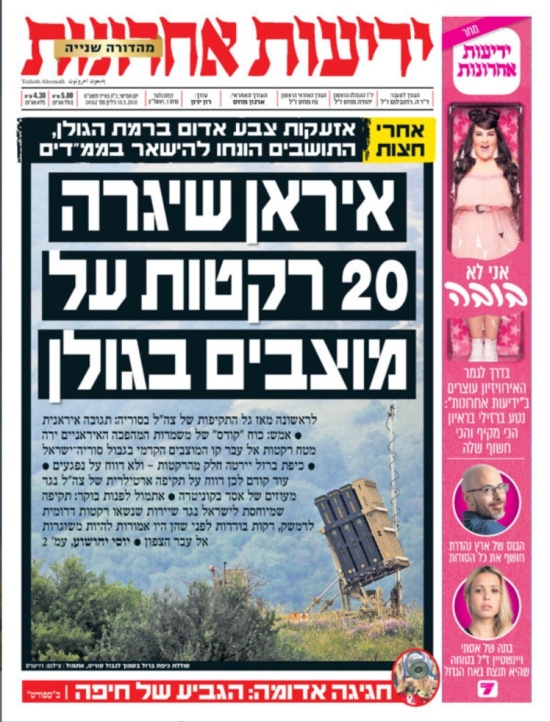 As soon as friends abroad heard about the instructions to open bomb shelters messages started pouring in saying “stay safe”, speaking of the threat Israelis face with missiles pointed at us.

It took me a while to figure out my reaction. Why should these well-intended words grate on my nerves so much? Is it the word “safe” or possibly the word “stay”? One assumes that safety is possible in the reality we live in. The other assumes that we have been safe and can remain so. Both assumptions are completely disconnected from our reality.

I think that’s what aggravated me.

No one seems to understand the tightrope we walk. Either people see Israel as a completely normal country whose citizens live privileged lives or as a dangerous war zone of constant fear and horror. Neither is true.

BOTH are true and that is a reality too complicated for most people to comprehend.

We don’t fit in the boxes that suit other people. We are a category unto ourselves.

Israelis live in the shadow of existential threat every single day. We raise kids and go on picnics with our families. We create beautiful art and world-changing inventions that improve every aspect of life. We help people in trouble, all over the world, all the time WHILE our own lives are in danger.

We are happy and live life to the maximum – while people are constantly trying to murder us. This isn’t an expression of paranoia or an exaggeration. This is a simple statement of fact. In the same vein, the instruction to open bomb shelters was not a sign of a sudden escalation in danger, it was purely a logical precaution considering the immediacy of the danger that is sometimes a moment away and sometimes happening in the specific moment. The fact that I am writing this from my desk and not sitting in a bomb shelter doesn’t mean that now I am “safe”.

Israelis have been asking themselves when the next war will be since the last one ended.  We joke about it and hope that the war won’t ruin our vacation plans (wars seem to have a way of happening in the summer, though not always).

Israelis have been discussing the massive amounts of missiles Hezbollah has received from Iran since the 2006 war. Many people in the north of Israel are certain they heard signs of tunneling underneath their homes (Hamas learned about using tunnels for fighting from Hezbollah, not the other way around). The IDF has been discussing the possibility of evacuating towns in northern Israel when the war starts. It is understood that Hezbollah might succeed in infiltrating the country and taking over an entire town creating a hostage crisis and the necessity for urban battle inside our own country.

We are not talking about IF a war happens. The only question is WHEN it will happen.

Which threat would you prefer? Even with the threat of ISIS, Hezbollah has been the real danger but they are only a proxy of their master, Iran, a country controlled by ayatollahs whose religious belief dictates that they must wash the world in blood for their messiah to come. What better way to do this than begin with Israel, the Nation who originally rejected their religion?

Political adversaries can be reasoned with. Religious fanatics are a completely different story. Looking the other way when fanatics, hell-bent on wiping another nation off the face of the earth races towards attaining the weapons that will enable them to achieve their goal is nothing short of evil.

Our Prime Minister has been explaining this to the world for years (take a look at this interview from 2006!). Now everyone is being forced to see how right he was all this time.

The possibilities of how horrible the next war could get are so shocking most people just blank out on the very real probabilities. We are talking about so many missiles being shot at once that our missile defense systems will not be able to protect the population, people being trapped in bomb shelters for heaven only knows how long (how does one prepare enough food, water, peace of mind to last that out?), a ground invasion, hostages and probably another front on our southern border with Hezbollah and Hamas attacking in tandem.

Our enemies will not win but the estimates of how many Israelis could die are staggering.

We’re not safe so we can’t “stay safe.” Israel isn’t safe and frankly Jews anywhere else are not safe. Those who believe they are safe live in a comforting illusion that can pop in an instant, with disastrous results. We in Israel at least understand what we are facing… and yet we are not hunkered down in a corner, shaking with fear. THAT seems to be what the world cannot understand.

How is it possible that a nation could be so extraordinarily brave? (Remember – bravery is not the lack of fear, it is being afraid and doing what is necessary despite the fear.)
How could a people so terribly abused be so gracious and bring so much benefit to others, including to their abusers? How could a people counter so much hate with so much love?

The dichotomy is so extreme it seems inhuman and thus impossible. That is why so many try so hard to “catch the Jew”, to discover some evil that Jews, particularly Israel is committing. The idea that Israel is just as bad as their worst (the Jew is the new Nazi syndrome) is more comforting than accepting and possibly (heaven forbid!) emulating the light of Israel.

Safety is a luxury we don’t have. We don’t expect anyone to provide us with safety. We’re not waiting to be rescued. What would be nice is if, at least, our friends and well-wishers truly understood the reality we live in.

We don’t do “safe”.  (Since when have Jews, in the history of the world, actually been safe?!). That’s not what we are here for.

We do love.
We protect others.
We lead by example.
And when we have to do it alone, we do it alone.
Eventually, I believe, others will follow.

In the meantime, don’t tell me to “stay safe.”

This article was first published at Inspiration from Zion: This is a Love Story