The US embassy in Jerusalem and Hamas riots.

As the US embassy is being opened in Jerusalem, Hamas is inciting riots on the Gaza border, using women and children as human shields, calling for martyrs to come die and even promising payment. 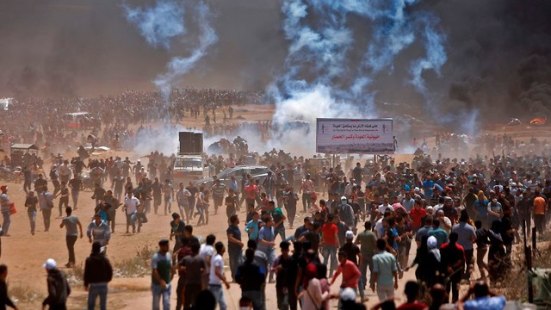 Their disregard for the lives of their own people is evil.

They threatened to storm the border, attacking IDF soldiers, burning tires poisoning the air and sending kite firebombs over the border and setting fire to Jewish farmlands.

And why do they do this?

The fact that America has made this historic move is important in that it DOES signal this recognition. The nations of the world have long been ambivalent about the Jewish people, saying that violence and antisemitism are unacceptable but doing nothing to stop it, saying that Israel has the right to defend her people but admonishing her for doing so.

Since her establishment, the nations of the earth have held their breath as over and over Israel was attacked, startled that against all odds, the nation survived.

The American move is important because it is an end to ambivalence. This is a declaration of understanding that the Jewish people have always been connected to Zion and will never leave. It is up to the rest of the nations of the earth to make the same decision and officially give up the secret or not so secret hope that the Jewish people will somehow disappear.

Hamas can also choose peace. They have to first accept reality. Unfortunately, at the moment they are choosing death – not for themselves but for the innocent people of Gaza who they are pushing to their deaths. They are paying people to die, asking people to die for a photo op! This is sickening.

And no less sickening are the members of the international media who are collaborating with this evil – creating beautifully posed photographs to make terrorists look like heroes, make IDF soldiers defending their homes like monsters. They too hope to undermine Israel’s legitimacy, consciously or unconsciously, in hopes that the Jewish people will disappear.

Our enemies can attack us. They can even damage us terribly. They cannot make us disappear.

The Nation of Israel has RETURNED and we will never leave again. That’s reality and eventually, Hamas, the media and the rest of the nations of the earth will just have to accept that.

First published at Inspiration from Zion: This is a Love Story