“The history of the Palestinian people goes back as far as”… This is where Arab “historians” disagree.

In the glorious history of the “Palestinian people”, there is only one “small” problem; nobody in history ever found them. 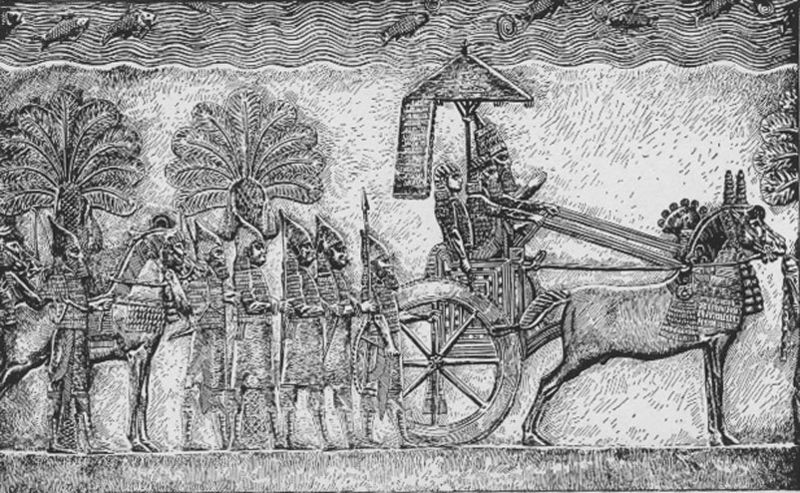 In 721 BCE, Assyria conquered the Kingdom of Israel. This is a historical fact nobody denies. Of course, the “Palestinian people” heroically fought against the aggressors and caused them heavy losses? Well, not exactly. Not a single Assyrian Chronicle, not even a single clay tablet, mentions this noble people. Could it be that hundreds of thousands of “Palestinians” were heroically fighting the Assyrian invaders – and these invaders did not even notice it? At the same time, those same Assyrian Chronicles are full of reports about the battles with the Israelis. So, Assyrians very well found Israelis, but did not notice any “Palestinians”?

Well, Assyrians did not notice any “Palestinian people”. Most probably, because the King Sargon II was a Zionist. And what about Babylonians? The same mystery awaits us when we start reading the Babylonian Chronicles about the conquest of the Kingdom of Judah between 597 and 582 BCE. Jews are there at every second page. And “Palestinians”? There is not a word about them. Babylonians did not find them, either.

But of course Persians found “Palestinians” and left to us the detailed description of this wonderful people, of its rich culture, interesting  habits, language…? Alas. They did not. The Persian Chronicles are telling us about Jews, about how Cyrus granted them the permission to return to Jerusalem, about how Persian satraps ruled in Judah and Israel… But about the “Palestinians” – not a word.

What makes the “quest to find Palestinians” even more amusing is that Alexander the Great passed all along the coast of Palestine from Tyre to Gaza in 332 – but did not find a single “Palestinian”: only Jews.

Where the heck did the “Palestinians” hide?

Well, OK, Assyrians, Babylonians, Persians, even Alexander the Great: it was so long ago! But what about the scrupulous and methodical Romans? The same story.

Romans explain in great detail how they were besieging Jerusalem, scrupulously informing us about how Jews were desperately defending it. They describe the Jewish revolts and how they quelled them and provide information about how Jews were fighting against them in Masada, about how Romans divided Judah and renamed it Palestine, about how they renamed Jerusalem in Aelia Capitolina…They tell us about a lot of things – but they do not say a single word about some “Palestinians”.

Moreover, although they renamed the land in “Palestine”, they went on calling its inhabitants as they were called for thousands of years: Jews. So, “Palestine” became the official name of the land, but its inhabitants remained Jews.

Just a moment, and where were the “Palestinian people” when Arabs came?

Its a million dollar question. Modern Arabs say they are “Palestinians”. And what did the Arabs of the 7th century, those who conquered Palestine, say about this?

Do you know any document written in the period of the Arab rule in Palestine that would say a word about some “Palestinians”? I do not. And nobody does, because such a document does not exist.

The situation becomes really amusing! Arabs today are foaming about how their forefathers lived in Palestine since the Time Immemorial, and their forefathers did not have any idea about their glorious and ancient past there.

Well, after all, the Arab rule in Palestine did not last long. Just 300 years after the Arab conquest, Turks –first Mamluks and then Ottomans- threw them out. Under various names – Seljuks, Mamluks, Ottomans- the Turks ruled in Palestine for 600 years. Quite enough time to find such a numerous and glorious ethnic group as the “Palestinian people”. Did the Turks find them? Alas! The Turkish official statistics accurately puts the number of Jews, Arabs, Circassians and Bosnians in Palestine, providing detailed information about the number of Muslims, Christians and Jews – yet they never mention any “Palestinian people”.

Ok. Assyrians, Babylonians, Greeks, Romans, Persians and Arabs did not happen to notice any “Palestinian people”. Turks, in those 600 years they ruled in Palestine, did not find them either. And where was this incredibly ancient and unbelievingly heroic people hiding after 1917? The numerous League of Nations Commissions (later UN Commissions) did not find them; all the League of Nations documents of that period are only about Jews and Arabs, but there is not a word about any “Palestinians” as a separate people.

Maybe the politicians of the Western countries talked about “Palestinians” then? No, they did not.

Delegates from 11 nations went to the area and found what had long been apparent: two conflicting groups, Arabs and Jews, whose national aspirations could not be reconciled. “Palestinians”? Who are they?

“We consider Palestine as part of Arab Syria, as it has never been separated from it at any time. We are connected with it by national, religious, linguistic, natural, economic and geographical bonds.” (First Congress of Muslim-Christian Associations, February 1919)

The representative of the Arab Higher Committee to the United Nations submitted a statement to the General Assembly in May 1947 that said,

“Palestine was part of the Province of Syria,” and that, “politically, the Arabs of Palestine were not independent in the sense of forming a separate political entity.”

In 1937, a local Arab leader, Auni Bey Abdul-Hadi, told the Peel Commission, which ultimately suggested the partition of Palestine:

“There is no such country as Palestine! ‘Palestine’ is a term the Zionists invented! There is no Palestine in the Bible. Our country was for centuries part of Syria.”

“Palestine and Transjordan are one.”

So the Arabs in the 1940s did not notice any “Palestinians”. Moreover, they did not “notice” any “Palestine” either!

OK. In the 40s, the Arab politicians did not find any “Palestinian people”. It’s no surprise; nobody could find them.

But maybe they “found” this mysterious “Palestinian people” later? They did not.

Moreover, Arafat himself made a definitive and unequivocal statement along the same lines as late as 1993, when he declared that,

“The question of borders doesn’t interest us… From the Arab standpoint, we mustn’t talk about borders. Palestine is nothing but a drop in an enormous ocean. Our nation is the Arabic nation that stretches from the Atlantic Ocean to the Red Sea and beyond it…The P.L.O. is fighting Israel in the name of Pan-Arabism. What you call “Jordan” is nothing more than Palestine.”

Not long ago, Azmi Bishara (the ex-Knesset member exiled from Israel for passing sensitive information to Hezbollah during the Second Lebanon War) who is anything except Israel’s friend said the same: there is no Palestinian people.

“The truth is that Jordan is Palestine and Palestine is Jordan.”

“Palestine is Jordan and Jordan is Palestine; there is only one land, with one history and one and the same fate,”

Prince Hassan of the Jordanian National Assembly was quoted as saying on February 2, 1970.

But the Arabs, who lived in Palestine since, as they assure us, the Time Immemorial, of course did not let Syrian and Jordanian dictators deprive them of their proud Palestinian past?  You will be surprised, but they let them.  And they had very serious reasons for this.

That the journal of the Zionist Organization of America was NEW PALESTINE?

That the Bank Leumi’s original name was the ANGLO-PALESTINE BANK?

That the Israel Electric Company’s original name was the PALESTINE ELECTRIC COMPANY?

And all these were JEWISH ORGANIZATIONS, organized and run by JEWS.

In America, the Anthem of the Zionist youngsters sang “PALESTINE, MY PALESTINE”, “PALESTINE SCOUT SONG” and “PALESTINE SPRING SONG”.

Until the mid/late 60s, to call an Arab a “Palestinian” would mean to insult him because until the mid/late 60s, the word “Palestinian” was commonly and unanimously associated in all the world with Jews, and the entire world knew: Palestine is just another name for Israel and Judah, like for example Kemet was just another ancient name for Egypt. Arabs who lived in Palestine identified themselves as Arabs and were insulted when someone called them “Palestinians”: we are not Jews, we are Arabs, and they used to respond.

There is a country in the Far East. The people who live there, (and they have lived in this country for many centuries), poetically called it “The Land Of The Rising Sun”. Then the Western travellers and geographers came to this country and gave it another name. Why? Maybe they were not poets, or maybe they came there on the sunset, or maybe they could not pronounce the original name in the original language… Did the people who lived there change because Western travelers and then politicians and journalists started to call their country by another name? No. They were those same people and they went on calling their country “The Land Of The Rising Sun”.

And the West calls it Japan.

And the West calls it Palestine.

The website where this article originally appeared is no longer in existence.

Previous Glorification of terror and violence in our Oakland, California community.
Next From Israel: Damn!!