AL HANISSIM – thanksgiving prayer for the Chanukah miracle; inserted in the Amidah and Grace After Meals.

ANTIOCHUS – Syrian Greek ruler called Epiphanes (“glorious”) by his admirers and Epimanes (“madman“) by his detractors.

BET HILLEL & BET SHAMMAI – rival schools of thought: Bet Shammai ruled that Chanukah lights should begin with 8 and reduce each night by one; Bet Hillel ruled the opposite.

BOOKS OF MACCABEES – part of the Apocrypha (works excluded from the Bible); disparaged by the Talmudic rabbis because these books did not promote Jewish spirituality and learning.

CHANUKAH – “dedication”; name refers to the reconsecration of the Temple.

CHANUKAH GELT – Chanukah money given to children; reflects the institution of Jewish coinage as a mark of independence.

CHRISTIANITY – honoured the Maccabean martyrs and incorporated the Books of Maccabees into their version of the Scriptures.

DREIDEL (also trendel or sevivon) – a top used in Chanukah games; the 4 sides bear the letters “nun-gimel-hei-shin”, standing for “nes gadol hayah sham” (“a great miracle happened there”); the game uses the letters as the numbers 50-3-5-300; though Judaism generally condemns gambling, the rule was relaxed on Chanukah whilst the lights were burning.

HAFTAROT – on Shabbat Chanukah the haftarah is Zechariah 2:27-4:7 with the message “Not by might or power but by My Name”; if there is a 2nd Shabbat the haftarah is I Kings 7:40-50 dealing with the dedication of the 1st Temple.

HALLEL – festive psalms of praise recited each day of Chanukah as on Sukkot (q.v.).

HANNAH & HER 7 SONS – Hannah watched her sons martyred by the Syrian Greeks.

HASMONEANS – the Maccabean family, called Chashmona’im by Josephus (q.v.) after a minor site in Judea or the great-great-grandfather of Judah.

HELLENISM – the spread of Greek culture amongst Jews; criticised by the sages when it meant paganism and immorality; Jews are expected to know when to withdraw from the ways of the environment.

JOSEPHUS – historian who describes the removal of the Temple Menorah to Rome where it was depicted on the Arch of Titus; the first to call Chanukah the Festival of Lights.

KISLEV – month in which Chanukah falls (some say Chanukah = “chanu kah”, “they encamped on the 25th (of Kislev)”).

LATKES – potato pancakes fried in oil; eaten on Chanukah to recall the miracle of the oil.

MACCABEES – nickname of Judah and his brothers; means “hammer” or “extinguisher”; possibly the initials of “Mi kamocha ba’elim HaShem”, “Who is like you among the gods, O Lord?”.

MA’OZ TZUR (“Fortress, Rock”) – Chanukah hymn by Mordechai, the letters of whose name open each verse; it is not certain that a 6th verse referring to Christian persecution was in the original text; the popular melody is from a German folksong.

MATTITYAHU (Mattathias) – a kohen from Modin, father of the Maccabee brothers; his call was “Whoever is on the Lord’s side, rally to me!” (Ex. 32:26).

MEGILLAT ANTIOCHUS (“Scroll of Antiochus”) – a medieval account of the Maccabean period; of uncertain authorship; not highly regarded as history or literature; emphasises the military struggle and not the spiritual dimension.

MENORAH (“light”) – 7-branched lampstand in the Temple; the 9-branched version on Chanukah symbolises the oil that lasted eight days; the characteristic symbol on ancient Jewish coins and tombs; renewed as part of the Israeli coat of arms.

OIL – the Maccabees found only one day’s supply of pure oil for the Eternal Light, which lasted until a fresh supply could be prepared (Talmud Shabbat 21b); though this seems to reduce the miracle to seven days, finding the one jar of oil was also a miracle; oil is preferred for the Chanukah lights but candles are acceptable.

PIRSUMEI NISSA (“publicising the miracle”) – the reason for placing the Chanukah lights a prominent place; today many groups kindle the lights in public squares or streets.

PSALM 30 (“A Psalm at the Dedication of the House”) – recited on Chanukah.

RABBINIC MITZVOT – 7 practices (including Chanukah lights) introduced by the sages in the spirit of the Torah (Deut. 17:8-11); each is regarded as a Divine commandment. Other examples are Megillat Esther on Purim and the recital of Hallel on festivals.

SHAMMASH (“servant”) – 9th light used to kindle the others since no “profane” use may be made of the official 8 lights; rabbinic tradition calls the Jewish people the ethical shammash of the world since Isaiah calls Israel “a light unto the nations”.

SUKKOT – commonalities with Chanukah include lights, songs, processions and 8-day duration; in the last year of the war Sukkot was postponed until Kislev (II Maccabees) and some traces of Sukkot remained as the basis for the Chanukah commemoration. 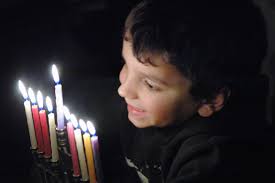 TALMUD – there is no tractate about Chanukah but the lights are mentioned in several places; the sages opposed any emphasis on the political and military events.

URIM (“lights”) – the Chanukah lights are lit at home (and also in the synagogue because the house of worship was central to the story); the lights should burn for at least half an hour, and longer on Friday when they are lit before the Shabbat candles.

Previous From the Desk of Dr Ron Weiser AM – Opinion piece Nov. 2017.
Next Joseph teaches us how to muster strength.