If there is anything that is not muddled right now, it is the news that David Friedman has at long last been confirmed as the new US Ambassador to Israel.  The vote in the Senate on Thursday was 52 – 46, with Democratic Senators Bob Menendez of New Jersey and Joe Manchin of West Virginia voting for him.

With the Democrats making it as difficult as possible, it was a long haul.  But the result is exceedingly positive.

As Mort Klein, President of ZOA put it,

“He is the first US ambassador to Israel that has a realistic, rational view of the issues affecting all the parties there.”

We welcome him with gladness.

Speaking of “realistic and rational views,” I share the following, as it begins to make the point about how muddled thinking is when it comes to how Israel is expected to relate to the PA. 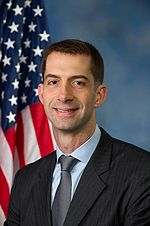 Senator Tom Cotton (R – AK) is one of the sharpest guys around, and quite often demonstrates solid judgement in his perspective on a situation.  In this region last week for a security assessment, he gave a statement to the JPost in which he said that this was no time for “splashy” peace talks of the sort that Kerry had promoted.

Right he is, of course.

“He [Cotton] questioned whether Palestinian Authority President Mahmoud Abbas [might be]…the last, best hope for a comprehensive agreement, given the apparent dearth of moderate leaders waiting in the wings.”

This is not a direct Cotton quote, it is the Post citing him. A bit surprised that Cotton would have considered this possibility, I found myself wondering how much was interpretation of the Senator’s words.

Think about what this says: Since a radical is likely to succeed Abbas as the head of the PA, it might be a good idea to try to forge an agreement when it’s still possible, while Abbas is at the helm. (An “agreement,” as it referred to here, means establishment of a “Palestinian state” as part of a peace treaty with Israel.)

Let’s leave aside two of the most obvious problems: that Abbas himself and his cohorts are not moderates (keep reading for more on this below!), and that Abbas will never forge an agreement with Israel. The man is weak, despised by his own people, and, at 81, on his way out.

If the guessing is that he is less radical than whoever will follow him, precisely what would an agreement Abbas forged with Israel be worth and how long would it last? The “peace” aspect would dissipate quickly, and we would be left with a radical, “non-peaceful” state.

The fact that there is instability in the PA and “an apparent dearth of future moderate leaders” is sufficient reason in and of itself for Israel to avoid a deal with the PA. But this is not said.

There is never a definitive statement about the absolute futility of anticipating a deal: always in the background lies the assumption that possibilities for achieving one should at least be considered.

This is how a large portion of the world has been conditioned to think. So much is this the case that the world even fails to consider the fact that a “radical, non-peaceful” (i.e., terrorist) state would be detrimental to everyone and not just Israel.

The on-going issue right now between Israel and the US is the forging of an agreement on how much building Israel will do in Judea, Samaria, and eastern Jerusalem.

Once again, I begin with the core problems:

First: It is prudent for Israeli leaders to discuss with the US the issues regarding Israeli building; hopefully this exchange, if done cordially and respectfully, can enhance understanding of our position and strengthen ties. Yet, in the end, Israel and the US do not have to be on the same page. The policy of Israel, a sovereign state, need not conform to what the US would prefer to see happen. But the fact that meetings are being held in order to come to an “agreement” implies that this is indeed the expectation.

And then: What we are encountering on the part of the Americans is an underlying assumption that Israel must make concessions of some sort when it is quite apparent that nothing is being negotiated with the PA in terms of, say, revamping PA textbooks or eliminating the program for providing payment to terrorists in Israeli jails.

Even now when there is some measure of good will on the other side (that is, the US side), we’re still confronting that old premise — that “peace” depends upon concessions from Israel. This was the premise of Obama, and of Bush before him; we expected different this time around.

There is a very troubling reason why this assumption ‒ explored below ‒ is being made by the Trump administration.

The good news as I write is that there is still no agreement. Good, because this means that Netanyahu has not jumped to agree to whatever it was that the US has been proposing.

“Greenblatt repeated statements that were heard many times during the Obama administration — that Israel is the stronger side in the conflict and therefore is expected to first take conciliatory measures towards the Palestinian Authority. Israeli officials assessed that this argument, as well as human rights issues raised by Greenblatt, echoed similar comments made [in the past] by Lempert, who holds similar views to those of J Street.” (Emphasis added)

This is exceedingly unsettling, to say the least. Daniel Horowitz wrote in “Conservative Review”:

“Lempert was literally Obama’s point person in the White House orchestrating his war against Israel. This decision [by Trump to keep her on] is Orwellian.” (Emphasis added)

As to the demands or “proposals” of the Trump administration with regard to building in communities in Judea and Samaria, various scenarios have emerged.

Netanyahu was said to have rejected this because of the restriction on building outside the blocs.  This is a major issue for him because of his promise to build a new community for the residents of Amona.

I will add that any notion of counting how many new houses could be built inside existing community boundaries within the blocs is also terribly offensive.

The Security Cabinet said that Israel has a right to build anywhere [within Area C] and I certainly concur. It is our land, and even the Oslo Accords don’t restrict Israeli building.

“The United States delegation reiterated President Trump’s concerns regarding settlement activity in the context of moving towards a peace agreement.”

There we have it: linking of Israel’s concessions on building with the possibility of “advancing peace.”

But this is different from limiting the number of houses to be constructed inside the blocs.

The latest report being circulated indicates that the US might “allow” Israel to build that new community for Amona, after which there would be a partial settlement freeze. There has been no final agreement on this, either, however.

The bottom line here? That joint readout, from which I cited above, also included this (emphasis added):

“The Israeli delegation made clear that Israel’s intent going forward is to adopt a policy regarding settlement activity that takes those [Trump’s] concerns into consideration.”

So, we are likely to concede something, unfortunately. But “taking concerns into consideration” does not mean doing precisely what Trump wants.

Netanyahu is constrained from making too many concessions by the nationalist portion of his coalition. Right now his coalition is shaky in any event, and we have to be grateful that he is looking over his right shoulder.

On this, stay tuned.

As to Trump: Genuine disappointment and enormous bewilderment as to what he is thinking.

I wrote above about the expectation that the successor to Abbas would be “radical,” and pointed out that Abbas himself and his cohorts are no moderates. And here we have some very powerful evidence to bolster my position:

Fatah official Abbas Zaki, who is a senior Fatah official and a member of the Fatah Central Committee, on March 21 published an article in the PA daily “Al Quds.”

It was translated in its entirety by MEMRI and can be seen here:

In the article Zaki argues that

“[We, that is Fatah] require the awakening and practical action of tens of thousands of Fatah activists, [who must] join the civil popular resistance against the settlers and occupation forces, and their number will double once they are joined by national and Islamic parties and organizations…” (Emphasis added here and following)

Remember that Fatah, the party of Abbas, forms the core of the Palestinian Authority. These are the people with whom, outrageously, we are expected to “negotiate peace,” and for whom we are supposed to make “gestures.”

Please, put out the word on this everywhere you can – on Facebook, on websites, in discussion groups, in letters to the editor, etc. etc.

And then, please! Write to President Trump with a summary of this information, including the MEMRI URL for authentication.

Ask him why Israel should be expected to make concessions and why he imagines that a genuine peace can be forged with these terrorists. Politely, briefly, tell him that enough is enough, and that he has a significant role to play in forging a new path of truth.

Quote these two statements from a major Fatah leader:

Encourage others to write to the president and put out the word on this as well.

At the AIPAC Conference in Washington yesterday, Israeli Ambassador to the US Ron Dermer declared that for the first time in years, there is no “daylight” between the US and Israel. As you may remember, Obama declared that such “daylight” was a good thing.

But Dermer was referring to the view of Iran and radical Islam shared by the two leaders. I do not belittle this for a second. It is of huge import.

We are still left scratching our heads with regard to the “settlement” issue. Especially is this the case as a Trump who understands the threat of radical Islam should also understand that fostering a Palestinian Arab state is not a good move.

“Under President Donald Trump, if the world knows nothing else, the world will know this: America stands with Israel…

President Trump is committed to “forging a lasting peace in the Middle East… There would undoubtedly have to be compromises for peace [but] President Trump will never compromise the safety and security of the Jewish State of Israel.”

Sigh. Mike Pence is a good guy, and he cares about Israel. But he is reduced here to meaningless platitudes.

What is heartening is that we are seeing the first signs that some people are starting to get it:

Texas Agriculture Commissioner Sid Miller was here last week on a visit organized by Samaria Regional Council head Yossi Dagan. While here, he made history, signing a first-ever agreement between the state of Texas and Judea and Samaria.

In the picture below, Dagan is to the left, and, obviously, Miller to the right; they are flanking Security Minister Gilad Erdan (Likud).

Not surprising that the initiative came from the very feisty state of Texas. May many similar agreements follow.