The Holocaust was an Arab story too.

camp, the UK liberal newspaper The Guardian declared in an editorial :

“The Arabs, meanwhile, cannot be blamed for feeling that Europe’s blood debt to the Jews was paid with what they see as their territory.”
The myth of the Arabs as innocent bystanders, who had no responsibility for the Holocaust — and indeed, paid the price for a European crime when Israel was established — is widely believed.

The Arabs, like other third-world peoples, are only ever seen as victims of western oppression and colonialism. They cannot themselves be guilty of oppressing others.

The West self-righteously deplores the old European antisemitism of the ‘far right’. But a new Green-Brown-Red antisemitism — encouraged by an alliance of the Far Left, the Greens and Islamist sympathizers — is studiously downplayed, ignored by the media, or blamed on Israel.

Truth to tell, the virus of Nazi antisemitism was exported to the Arab and Muslim world as early as the 1930s. It gave ideological inspiration to Arab nationalist parties like the Ba’athists in Syria and Iraq and paramilitary groups like Young Egypt, founded in 1933. Anti-Jewish conspiracy theories are the central plank of the totalitarian Muslim Brotherhood, founded in Egypt in 1928, and their ideological cousins, Islamic State, who seek today to impose Allah’s kingdom on earth through jihad and forced conversion of non-Muslims.

The Holocaust was, in the words of author Robert Satloff, as much an Arab story as a European. In spite of efforts to trumpet the stories of individual ‘Righteous’ Muslims, who rescued Jews (particularly in Albania), scholars continue to uncover evidence of Arab sympathy and collaboration with Nazism.

Palestinian Arabs in all social strata have great sympathies for the new Germany and its Führer. .… If a person identified himself as a German when faced with threats from an Arab crowd, this alone generally allowed him to pass freely. But when some identified themselves by making the “Heil Hitler” salute, in most cases the Arabs’ attitude became expressions of open enthusiasm, and the German gave ovations, to which the Arabs responded loudly.

When Tunisia came under direct Nazi occupation between November 1942 and May 1943, some 2,000 Jews were sent to work in labour camps. The reaction of Tunisia’s Muslim majority was, according to Robert Satloff, ‘widespread indifference.’

Gestures of support and active assistance for the minority being displaced, disenfranchised, plundered and conscripted into forced labour were very rare. Arab passers-by would publicly insult and physically attack individuals.

Although he was not the only collaborator with Nazism — Fawzi al-Qawuqji, Rashid Ali al-Kelani, Abu Ibrahim al-Kabir, Hassan Salama and Arif Abd al-Raziq spring to mind — the role played by the Palestinian leader, The Grand Mufti of Jerusalem, Haj Amin al-Husseini, in fomenting anti-Jewish incitement and violence, not just in 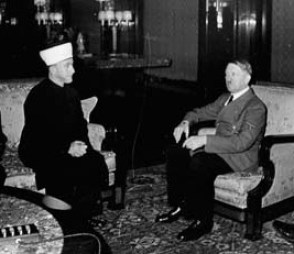 Palestine but across the Arab world, is key. From 1931, he conflated ‘Zionists’ with ‘Jews’: any Jewish community became fair game for collective punishment. And still is.

The Grand Mufti met with Hitler in Berlin in November 1941 to discuss the extermination of the Jews in the Middle East. He spent the rest of the war as a guest of the Nazis.

“The Mufti was one of the initiators of the systematic extermination of European Jewry and had been a collaborator and adviser of Eichmann and Himmler in the execution of this plan… He was one of Eichmann’s best friends and had constantly incited him to accelerate the extermination measures.”

On a visit to Auschwitz, the Mufti reportedly admonished the guards running the gas chambers to work more diligently. Throughout the war, he broadcast regularly on German radio to the Middle East, preaching his pro-Nazi, anti-Semitic message to the Arab masses back home.

Had the Allies not liberated Tunisia from the Nazis, Libya from the Italian fascists, and Algeria and Morocco from the Vichy regime in 1943 – it is a fair bet that the local Arab population would not have lifted a finger to halt the deportation of the Jews of Palestine and the Arab world to death camps.

The Palestinian grand Mufti played a central role in plotting the pro-Nazi coup in Iraq.

The Mufti was personally responsible for the deaths of 20,000 European Jews murdered in the Nazi Holocaust. He organised the killing of 12,600 Bosnian Jews by Muslims, whom he recruited to the Waffen-SS Nazi-Bosnian division. He personally stopped 4,000 children, accompanied by 500 adults, from leaving Europe and had them sent to Auschwitz and gassed; he prevented another 2,000 Jews from leaving Romania and 1000 from leaving Hungary for Palestine: they too were sent to death camps.

Only three years after the end of WW ll, the members of the Arab League were bent on emulating the Nazis. They set about making the Arab Middle East Judenrein. They applied Nuremberg-style laws, criminalising Zionism, freezing Jewish bank accounts, instituting quotas, imposing restrictions on jobs and movement. The result was the mass exodus and spoliation of of a million Jews. Yet very few Arabs acknowledge they are to blame for the so-called Jewish nakba. Holocaust denial goes hand-in-hand with Jewish nakba denial.

In 1945, the Mufti of Jerusalem should have been tried as a war criminal at Nuremberg. He was indicted, judged and convicted by Yugoslavia for crimes against humanity, arising from his pivotal role in the Handschar and Skandeberg SS divisions which deported Balkan Jews from Kosovo, Macedonia and Thrace. But the Allies shrank from offending the Arabs.

Not only has the virus of Nazi antisemitism never left the Arab and Muslim world, it has grown exponentially. Muslim immigrants have carried the the virus of Jew-hatred back into European countries. Saudi petrodollars have financed the spread of Islamism, with its implicit antisemitism, worldwide.

That is why today, in the Arab and Muslim world, Holocaust denial is alive and well.

The ghost of Nazi-inspired, anti-Jewish bigotry was never exorcised from the Arab world. In fact Arabs became its torch-bearers. Adolph Eichmann himself hoped his “Arab friends” would continue his battle against the Jews who were always the “principal war criminals” and “principal aggressors.” He hadn’t managed to complete his task of “total annihilation,” but the Muslims could still complete it for him.

First published at The Times of Israel

MYTH: A Jewish terrorist tried to burn down the al-Aqsa Mosque.

FACT Palestinian propaganda is not very original and easily disproven yet smears are repeated, like …