Arlene from Israel – Without Recourse

It should be, even in our less than perfect world, that international courts were bastions of ethical judgment and impartiality.  OK, maybe that’s expecting too much.  Shall we say, just institutions that model some degree of ethical judgment and impartiality.  But even this is expecting too much in today’s climate of severely distorted perceptions and values.

The court I have in mind, of course, is the International Criminal Court, which is just one more corrupt – and politically correct – international body.  As today’s JPost editorial has it:  the court is unable to “differentiate between good and bad.”  Ah, yes.

On Friday, Court prosecutor Fatou Bensouda announced her decision to initiate a “preliminary probe” into alleged war crimes committed by Israel this past summer during the war in Gaza (Operation Protective Edge). This is to determine whether prosecution is appropriate.

In order to do this, she had to stretch credibility in several regards. First, she had to determine that, for purposes of the Court, the Palestinian Authority was a state.  Never mind that the PA does not meet all the criteria of a state, the General Assembly – another upstanding institution – has accorded the PA status as an observer state. The ICC says that’s enough.

And then, she had to maintain the fiction that Gaza, which is controlled by Hamas – a terrorist organization, is part of that “Palestinian state.”  This was necessary, because a state that accepts the ICC’s jurisdiction can only bring charges in crimes committed within its own borders.

Lastly, she had to overlook the fact that the IDF routinely does investigate charges regarding behavior in the field and pursues prosecution when this is deemed necessary.  The IDF – the most moral army in the world – is, in fact, super-scrupulous in this regard. But the Court, you see, is only supposed to step in if such systems are not in place.

International lawyer Alan Baker continues to say this will come to nothing, and that we only serve Abbas’s purposes when we become agitated about this situation.  So we will not be agitated.

Prime Minister Netanyahu called the Court decision “absurd,” which it is.  The Prime Minister’s Office released a statement that said, in part:

“We see here something truly tragic. The lofty goals of the ICC are being turned upside-down. The court was founded to prevent a repeat of history’s worst crimes, foremost among them the genocide of six million Jews. Now the Palestinians are cynically manipulating the ICC to deny the Jewish state the right to defend itself against the very war crimes and the very terror that the court was established to prevent.” (Emphasis added)

But the Court cannot be “manipulated” without its consent. Bensouda could have ruled that the PA was not a state. I see something very perverse in Palestinian Arab involvement with international organizations, which are prepared to voluntarily distort their essence or their mandates in an effort to be politically correct. The PA is such a very minor player in the scheme of world affairs. What gives it this power?

The State Department, I must note, said,

Actually, I shouldn’t say, as I did above, that we are “without recourse.” This is true with regard to the international institutions where we might have expected some modicum of support. But we certainly have recourse to our own sense of good and bad, and, most importantly, to the judgment of Heaven.

There are, as well, nations that are with us. I note in particular Canada – Canadian Foreign Minister Stephen 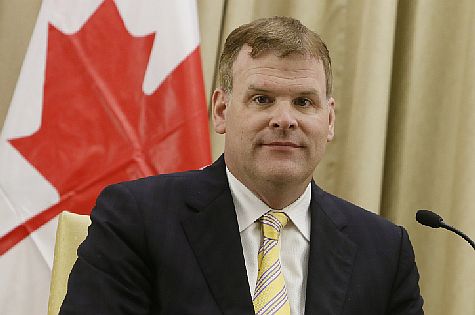 Baird has just been here, lending words of support.

“Canada doesn’t stand behind Israel; we stand shoulder-to-shoulder with it…The great struggle of our generation is terrorism and far too often the State of Israel and the Jewish people around the world are on the front lines of that struggle.” (Emphasis added)

Can we clone him? On his visit to Ramallah on Sunday, Arabs pelted his car with eggs because of his pro-Israel stance.

Missiles fired from two helicopters struck at targets in the Syrian Golan yesterday, taking out either five or six members of Hezbollah. Israel never officially acknowledges involvement in such attacks, but I would say that here we have an instance of our relying on our own resources with excellent judgment.

Among those killed was Jihad Mughniyeh, son of Imad Mughniyeh, former Hezbollah operations chief whom we dispatched some time ago. According to western intelligence sources, Jihad was head of a large-scale terrorist cell, with direct links to Iran, that had attacked Israel in the past.

The coming together of so many high level Hezbollah and Iranian fighters at one time, near the Israeli border, strongly suggests that a major operation was imminent. It might have included rockets, infiltrations into Israel, border bombings, anti-tank fire and more. Just days ago, Hezbollah head Hassan Nasrallah threatened attacks on Israel.

The attack that smoothly took out Hezbollah and Iranian high level personnel suggests superb Israeli intelligence and an operation that was pinpoint.

As I see it, this not only eliminated an immediate danger (it was essential, given the intelligence!), it enhanced our deterrence power – always a good thing. They know we are watching, and that we act in our own best interest with great skill.

There is no doubt about the fact that there was a message here for Iran, as well as for Hezbollah.

But the question now is what sort of retaliation we are likely to see. It is considered unlikely that there will be a major attack that would escalate into war to our north. But there is certainly a heightened risk of terror attacks – whether we are looking at infiltration into the north of Israel with attempts at kidnapping IDF soldiers, or attacking Israelis elsewhere in the world, as has been done before.

Whatever might be ahead, our forces are on high alert in the north now, with leaves cancelled and an Iron Dome installation moved northward.

Maj.-Gen. (res.) Eyal Ben Reuven, in a press briefing arranged via The Israel Project, outlined the sensitive situation that Israel now faces: Should, for example, an Israeli soldier be killed by Hezbollah, or should rockets be launched against civilians in our north, this would invite retaliation that might generate a significant escalation in fighting.

The situation of Hezbollah, operating in the Golan, directly across Israel’s border to the north, is exceedingly complex. This area is no longer directly controlled by Assad. Hezbollah, said General Ben Reuven, prefers acting against Israel from this theater rather than from its home base in Lebanon. The Lebanese are not always happy with Hezbollah because of the violence unleashed on its population in response to Hezbollah actions. However, Hezbollah still has a primary goal of supporting Assad, and does not want to invite an Israeli attack inside Syria that might result in weakening him.

Right now, with some 200,000 Syrians dead in the civil war, there seems to be a standoff, with neither side achieving victory.

I end – for now – with a good news story that is both moving and astounding:

Michael Mittwoch, 92, and his wife Marion, 90, fled the Nazis in Germany. They came to Israel, where they participated in the founding of Kibbutz Lavi in the north.  ow they have just celebrated the birth of their 100th (this is not a typo) great-grandchild.

This is not just a wonderfully uplifting story, it demonstrates something: We are a people who move past adversity to life, a testament to hope.

Previous Palestinians not “Resorting to Violence”; Murdering & waging war
Next In Sydney, A Vision Of An Islamic Army.

From Israel: “Stupid Is, As Stupid Does!!”

Next Sunday, May 29, is Yom Yerushalayim – a day that marks Israel’s liberation of …