Arlene in Israel – Light the Lights.

Tonight (Israel, last night Australia) we light the first light in the eight day Festival of Chanukah. A time for joy and hope. 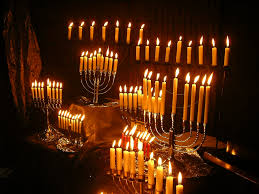 Actually, there are two stories of Chanukah: One has to do with the miracle of the oil, which burned in the Temple for eight days although there was only enough oil for one day.  In commemoration of this, we eat foods associated with oil – potato latkes (pancakes) and sufganiyot (donuts). 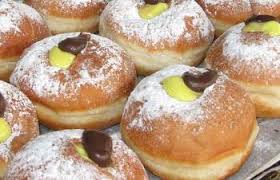 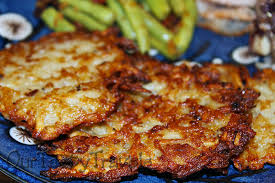 In truth, if we are going to talk about miracles: the existence of modern Israel is a miracle. We should be ever mindful of this, and ever grateful.

Then there is the historical Chanukah story of the Maccabees battle against the Greeks – which enabled them to regain and rededicate the Temple after it had been defiled.  There are lessons here in terms of determination and bravery (for the war was very long and bitter) and dedication to our traditional practices and our faith.  All very much lessons for today.

A particular determination is required right now.  For these are very tough times, no matter how you cut it.

I held off posting yesterday to see what would evolve with regard to the UN Security Council and anti-Israel resolutions to be brought forward.  But there is nothing definitive to report yet.

Prime Minster Netanyahu, who met with Secretary of State Kerry yesterday, seems to be holding tough.  He says he will not agree to any UN coercion.

Kerry himself is waffling, and this is very unsettling.  Netanyahu put on a good front before meeting with Kerry, saying that there was no reason to believe that the US would diverge from its traditional position of vetoing Security Council measures that are anti-Israel.  But that is not really the case.  We know what a lame duck Obama is capable of.

At a press conference today, Kerry said that the parties themselves must resolve the Arab-Israeli conflict – it cannot be done from the outside.

Nu?  That means it cannot be resolved via UN attempts to force Israel to move back to the ‘67 line.  No?

But in that same press conference he offered no assurances about his readiness to veto what might yet be proposed.

Of course, it is possible that the Kerry “indecision” is a tactic aimed at getting Netanyahu to cave on agreeing to negotiate. So far I have no indication that Netanyahu has agreed to anything.

One of the things I picked up today was a reference by Kerry about “the cycle of violence,” which invariably infuriates me. This is a false moral equivalency. There is no cycle of violence, only Arab terrorism and Israeli response.

The PA may bring forward a proposal this week that would require Israel to return to its situation prior to the 1967 war by February 2016; it would acknowledge eastern Jerusalem as the capital of the Palestinian state, and would make provision for the “Palestinian refugees.”  There is no precise wording of this proposal available in its entirety yet.

The French are working on a different proposal that would, as I understand it, require that negotiations between Israel and the PA be completed in two years.  Somewhat less horrendous than the PA version, but neither viable nor acceptable.

Please, dear readers, do not panic about any of this.  It’s a long way from a PA-proposed resolution in the Security Council, which has not yet materialized, to a real shift in Israel’s situation.

Relevant to this, I believe, is the announcement by the PA that they would not be cancelling security cooperation with Israel over the death of Abi Ein, as had been threatened. A PA official now admits that they never intended to follow-through with the threats.  They rely on Israel, said this official.

Hey, no surprise there.  Abbas wouldn’t last a week if not for Israel’s control of Hamas in Judea and Samaria.

What we see then is that the PA leadership makes threats that it doesn’t necessarily intend to act upon.  And that Israel has some leverage over the PA.

The PA says that if its proposal does not pass in the Security Council it will go to the International Criminal Court and level charges of war crimes against Israeli leaders.  This may be yet another threat.  Abbas has already been warned by our leaders that this path would work two ways. In any event, there is no guarantee that the ICC would accept “a Palestinian state” as a member.

But see what one very wonderful legal warrior in Israel, Nitsana Darshan-Leitner, head of Shurat Ha-Din – the Israel Law Center, is doing: filing claims in the ICC against Abbas and Hamas leaders.  She is taking the offensive and hopes to make Abbas think twice.

Let me turn here, then, to a brief update on the political circus:

Eli Yishai has made it official. He has broken with the Shas party and is forming a new party, Yahad – Together.  It is being watched very closely, for it appears that it will not be just a duplicate of the haredi party, Shas, but will bring in national religious elements as well.  It aims to be a party that, indeed, unifies people in their concern for religious values and political nationalism.  Although it is early to make predictions, it carries genuine promise.

What we know so far is that Yoni Chetboun, who just left Habayit Hayehudi because of some deep discontents, will be joining Yishai. And now all eyes are on the relationship between Uri Ariel and Naftali Bennett.  If Uriel walks out of Habyit Hayehudi with his Tekuma faction, he would very likely join Yishai.

There are very early predictions that when the dust settles this new party might bring in as much as seven mandates.  Aryeh Deri, who now heads Shas, is having conniptions. But on Aryeh Deri, who is not exactly the model of an upright politician, it looks good.  Apparently Yishai – who was pretty much shafted by Deri – will take a fair amount of support with him and has already received the endorsement of some significant rabbis.

Finally…Chanukah, songs.  First a medley of some traditional songs with a pleasing twist:

And then, a very lovely new version of the classic Maoz Tzur, by much-loved Israeli entertainer and cantor Dudu Fisher:

If it is reproduced and emphasis is added, the fact that it has been added must be noted.
Website: http://www.arlenefromisrael.info/

From Israel: Say What?!!

A week ago, on September 21, Joe Biden, in his capacity as president of the …