“Kaf Tet B’November” is precisely this: the 29th of November.

Sixty seven years ago today, the United Nations General Assembly voted to recommend the division of Palestine west of the Jordan River into a Jewish state and an Arab state.
There are so many lessons to be derived from this historical date that I could not let it pass without mention:

All of the land that the General Assembly recommended be divided was British Mandate land.  In  1922, the League of Nations – in accordance with the San Remo Resolution of 1920 – conferred upon Britain the mandatory responsibility for securing the establishment of a Jewish national home in Palestine.

Actually, the original Mandate for Palestine included all of what is today Jordan, as well.  But the British very quickly lopped off all of the land east of the Jordan (77% of Palestine) and, in a bit of political maneuvering, turned it over to Abdullah ibn Hussein of Arabia.

The Mandate for Palestine was binding in international law from the time of its establishment at the San Remo Conference.

As Winston Churchill, who was British Secretary of the State for the Colonies, said in 1922:

“When it is asked what is meant by the development of the Jewish National Home in Palestine, it may be answered that it is not the imposition of a Jewish nationality upon the inhabitants of Palestine as a whole, but the further development of the existing Jewish community, with the assistance of Jews in other parts of the world, in order that it may become a centre in which the Jewish people as a whole may take, on grounds of religion and race, an interest and a pride. But in order that this community should have the best prospect of free development and provide a full opportunity for the Jewish people to display its capacities, it is essential that it should know that it is in Palestine as of right and not on sufferance.”

The Mandate accorded Jews, and only Jews, political right to self-determination on this land; non-Jews were accorded only individual civil rights.  “Close settlement” of the Jews was to be encouraged everywhere in the land except areas required for public use.

A host of legal documents over the years has testified to the continuing validity of the Mandate.  I will note here that Article 80 of the UN Charter verified that the Mandate survived the demise of the League of Nations and persisted as a legal commitment to the Jews.

For more information about the Mandate for Palestine, see: 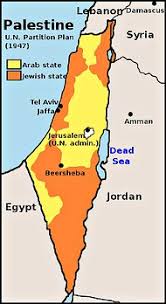 All of the above said, the years from 1922 until 1947 did not proceed according to the vision of the Mandate.  This was in good measure because the British – who as it turned out were considerably less than eager to honor their mandatory responsibility in any event – found themselves contending with a restive and sometimes violent Arab population within Mandatory Palestine.

Ultimately, the British threw up their hands and informed the UN (the successor to the League of Nations) that it would be turning back the Mandate.  At this point the UN General Assembly recommended that Mandatory Palestine be divided. This was Resolution 181.  The vote was 33 to 12 with 10 abstentions:

In spite of the fact that what was recommended was considerably less than what was to be have been accorded to the Jews under the Mandate – less than the Jews had a legal right to according to the international accord of the Mandate – there was enormous rejoicing among the Jews of Palestine when the vote was announced.

Why this rejoicing? Because after the interminable grief of Arab hostilities, the international community was setting the stage for Jewish self-determination.

The Jewish community – represented by the Jewish Agency – accepted the recommendation; the Arabs states, acting as a bloc, unanimously rejected it.

This is of enormous importance in several regards.

The Resolution required the agreement of both parties in order for there to be a change in the legal status quo.  The Mandate land had been accorded to the Jews.  Had the Arabs agreed, and concluded a legal accord with the Jews that established a border between the two states, the legal situation would have changed.  But this never happened, my friends

Resolution 181, coming as it did from the General Assembly, was ONLY a recommendation and not binding in international law.  Legally, the partition did not exist: the land that was in the part of Palestine that had been recommended for an Arab state was still Mandate land.

Why did the Arabs refuse?  Same story as today. They wanted all of the land, and were not content to officially endorse any Jewish state on any part of the land.

The Arabs sometimes claim today that they have a right to the land that Resolution 181 recommended become an Arab state.  This is unmitigated nonsense.  They refused it. They could have had it and chose not to take it.  There has NEVER been a sovereign Arab state (never mind a “Palestinian Arab” state) in Palestine.  They have convinced the world otherwise, but they have no claim.

It must be made clear that this recommendation did not “establish” the state of Israel.  It paved the way, and then the Jewish Agency declared the State of Israel on May 14, 1948.  The state was declared on the portion of Palestine that Resolution 181 recommended be allocated for a Jewish state.  But this does not mean that the Jews had legally relinquished rights to the rest of Palestine.

Within hours of declaring the state, the people of Israel were fighting the War of Independence – the Arab states vowed to annihilate the new Jewish state. And in point of fact, the Arab attacks had begun with the passage of Resolution 181.  The Jews of Palestine were already thorough immersed in protecting their lives and the portion of the land upon which their community lived and which would be established as their state.  That they had not the resources at that point to physically claim all of Palestinian as theirs does not negate their right to claim that land now.

The implications for what is going on today are obvious, and I will pick up on this in my next posting.

Previous A Book Review:The Case Against Academic Boycotts of Israel,
Next West Supports Terrorism Against Israel via UNRWA