FAIRFAX has confirmed columnist Mike Carlton has resigned after intense pressure to apologise after using anti-semitic and abusive language towards readers.

“What got him in a lot of trouble is the way he responded to those readers. It’s not the article itself, it’s the way he treated readers.”

Carlton was caught out sending abusive emails and tweets to readers who questioned his position on the conflict in Gaza, calling one critic a “Jewish bigot” and telling several others to “f**k off”.

According to Mr Alymer, representatives from Fairfax Media called Mr Carlton last night to enter into discussions to fix the issue.

“We said we’d suspend him and he’s resigned on the spot,” Mr Alymer said.

“He was apologetic. He accepted he had gone too far. As more emails emerge we kind of figured we needed to suspend him. We need to put the readers first.

“It wasn’t one or two emails, It was several emails. You just can’t do that.”

“I have asked Mike to apologise for these actions. Mike regrets his behaviour and will be contacting affected readers to apologise,” he wrote. 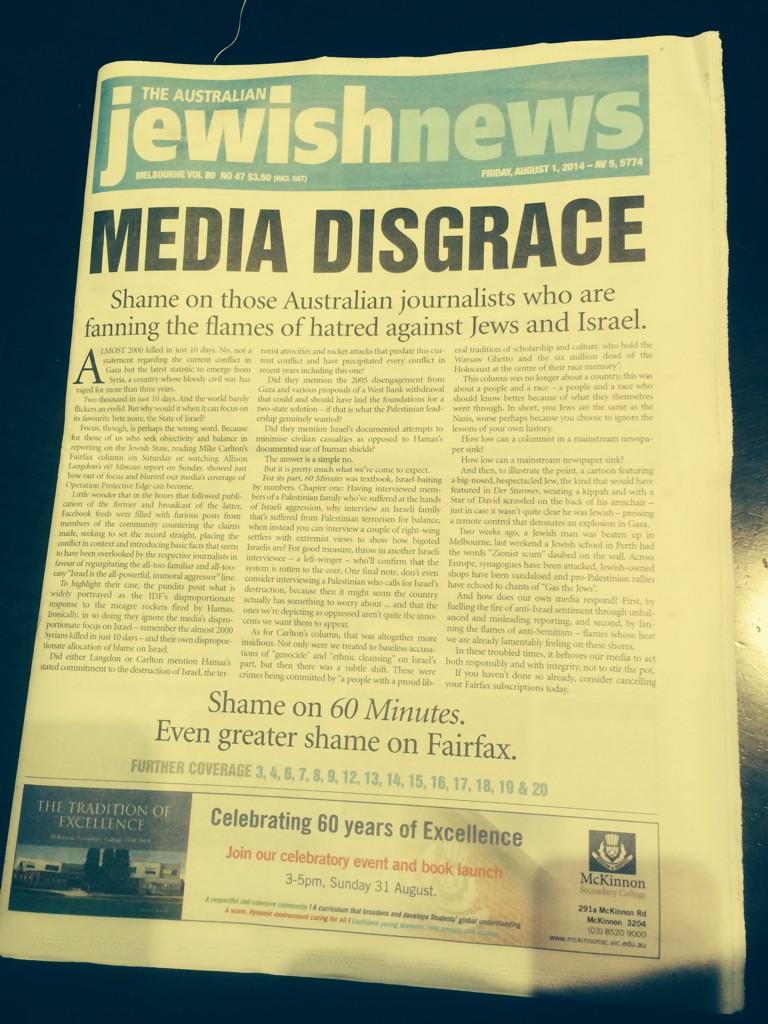 According to The Australian , Mr Goodsir wrote to one disgruntled reader:

“Your points are valid, and well made — and, while I am not sacking him as you have urged, please rest assured that I have admonished him in the strongest terms”.

Carlton’s column on the conflict in Gaza on July 26 had many readers up in arms and this week Fairfax apologised for running a cartoon, which it said in hindsight was racist, that accompanied it.

“This is not the first time Mr Carlton has resorted to abusive responses to members of the Jewish community over many years and we are glad the SMH editors are now aware of this”.

The Sydney Morning Herald is reportedly working in overdrive to save its plummeting subscriptions, with readers appalled at the Herald’s coverage of the Israeli/Gaza conflict.

“Israel has never offered the Palestinians a just and equitable peace,” Carlton wrote in his column.

“Fascism in Israel? At this point the Australian Likudniks, as Bob Carr calls them, will be lunging for their keyboards.

“There will be the customary torrent of abusive emails calling me a Nazi, an anti-Semite, a Holocaust denier, an ignoramus.

“As usual they will demand my resignation, my sacking. As it’s been before, some of this will be pornographic or threatening violence.”

Meanwhile, this isn’t the first abusive tweet to roll off Carlton’s tongue.

Previous Arlene from Israel – And Now?
Next A Tale of Two Rallies & The Use of Children.