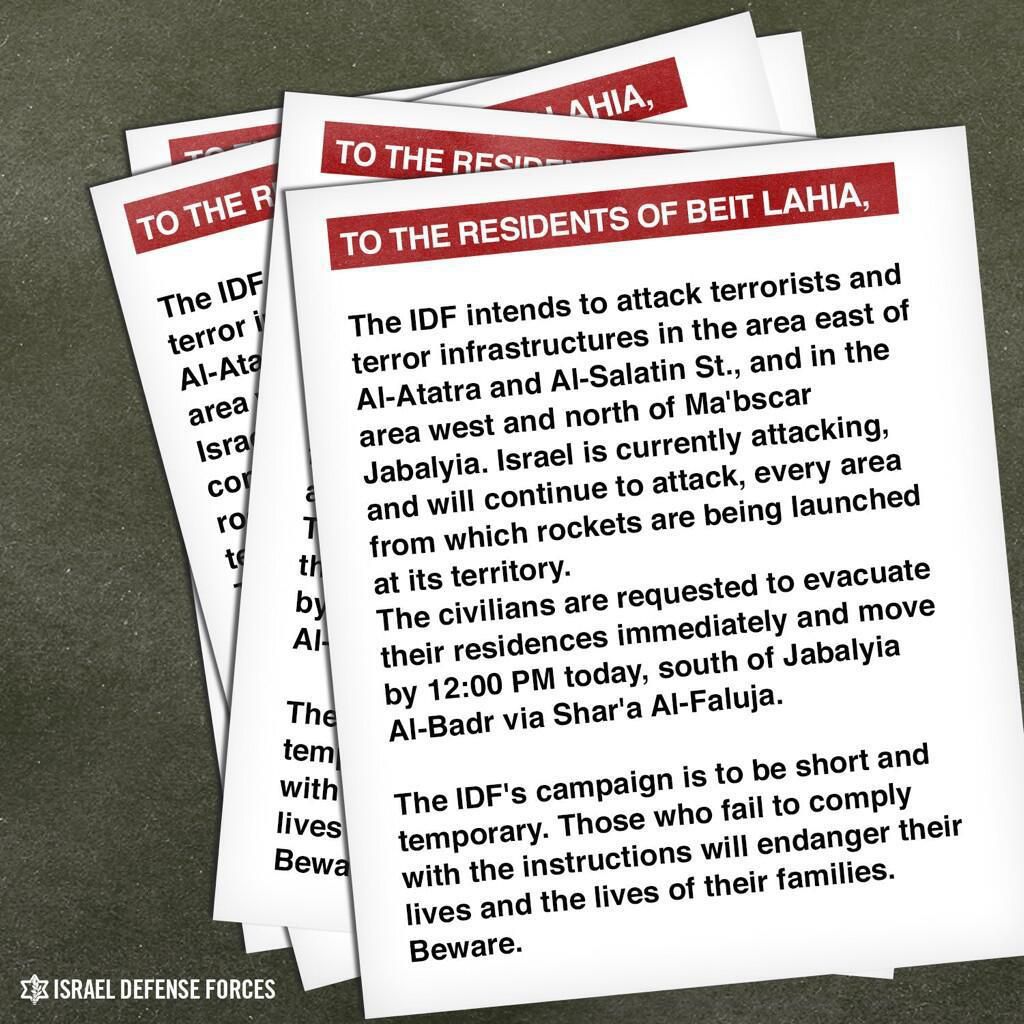 The failure of many Gazans to leave their homes and seek safer shelter after ignoring Israeli leaflet drops, mobile phone calls and even the firing of harmless warning shots as a last resort – has been a major contributor to the increasing number of civilian deaths and casualties in Gaza.

This phenomenon has presented a perplexing problem for Israel as it continues its determined drive to destroy the Hamas arsenal of rockets, rocket launchers, weapons caches and extensive network of tunnels located in, under or in the vicinity of densely populated housing areas of Gaza.

Former US President Bill Clinton hit the nail squarely on the head with this prescient statement on 17 July:

“Hamas was perfectly well aware what would happen if they started raining rockets on Israel. They fired a thousand of them, and they have a strategy designed to force Israel to kill their own civilians so that the rest of the world will condemn them…

… In the short to medium term, Hamas can inflict terrible public relations damage on Israel by forcing it to kill Palestinian civilians to counter Hamas.”

The strategy was given expression by Hamas MP Fathi Hammad in 2008:

“[The enemies of Allah] do not know that the Palestinian people has developed its [methods] of death and death-seeking. For the Palestinian people, death has become an industry, at which women excel, and so do all the people living on this land. The elderly excel at this, and so do the mujahideen and the children. This is why they have formed human shields of the women, the children, the elderly, and the mujahideen, in order to challenge the Zionist bombing machine. It is as if they were saying to the Zionist enemy: “We desire death like you desire life.”

The execution of the strategy rests on two platforms – the religious and the psychological.

The religious platform has been articulated by Palestinian Authority Minister of Religious Affairs – Mahmoud Al-Habbash – who declared in his televised Friday sermon from the Al-Yarmouk Mosque in Ramallah on 20 December 2013:

“The entire Hamas system worked to promote and advance the theme of martyrdom. It emerged as its greatest weapon and, unfortunately, the most effective and destructive weapon that the movement had, too. Preachers in mosques used their sermons to speak about the importance of martyrdom (fi sabil Allah, “in accordance with Allah’s will”), until many people throughout the West Bank and Gaza sincerely believed that Allah wanted to be sanctified through the sacrifice of believers’ lives, and that only through martyrdom could they prove their loyalty and their faith.”

Risking death for the sake of martyrdom – rather than leaving a declared danger zone for safer waters – has become a religious obligation for many Gazans.

The psychological platform is evidenced by Hamas’s Ministry of Interior spokesman Iyad Al-Buzum calling on its civilian population on 12 July to ignore Israel’s warnings and remain in their homes in spite of the danger:

“The [Hamas] Ministry of the Interior and National Security calls on our honorable people in all parts of the [Gaza] Strip to ignore the warnings [to vacate areas near rocket launching sites before Israel bombs them] that are being disseminated by the Israeli occupation through manifestos and phone messages, as these are part of a psychological war meant to sow confusion on the [Palestinian] home front, in light of the [Israeli] enemy’s security failure and its confusion and bewilderment.”

One day later the same spokesman issued another similar warning:

“Answering the occupation’s calls will merely aid it in carrying out its plans to weaken the [Palestinian] home front and to destroy property and homes as soon as you leave them. We call on all our people who have left their homes to return to them immediately.”

“Hamas can, however, be accused of making people complacent, repeatedly stating in the media that the Israeli warnings were psychological games and asking the population to ignore them. Some mentioned this as a reason for staying behind; returning home having initially left.”

The counter-argument to that was the need to prevent panic spreading.”

The discovery of the extensive network of cement strengthened tunnels throughout Gaza – with many already located snaking into Israel and in and under thousands of residential dwellings – has posed a major problem for Israel in completing its military objectives.

Staying in their homes risking possible death to achieve martyrdom or alternatively succumbing to propaganda falsely promoting a fools paradise on earth has been spectacularly exploited by Hamas.

Respect for life has become the real victim.

David Singer is a Sydney Lawyer and Foundation Member of the International Analysts Network and blogs at Jordan is Palestineand publishes at Canada Free Press.

Previous Into the fray: Why Gaza must go.
Next OzTorah: Ask the Rabbi.

Do the Palestinian-Arabs genuinely wish to establish a state for themselves?  Or do they really …