And fear.  And fury.  And a terrible sense of déjà vu.

At this point in time, it’s impossible to piece together full information, especially as some details are being withheld.  Two are students in Makor Chaim yeshiva high school in Kfar Etzion, which is in Gush Etzion, and the third is a student in Shavei Hevron yeshiva in Hevron.  It is being reported that Naftali Frenkel has American citizenship as well as Israeli – which should be of interested to US authorities.  All three, I am assuming, were headed out from their residential places of study for Shabbat.
To the best of my understanding, they were last seen before midnight Thursday at a junction in Gush Etzion frequently used by hitchhikers.  Hitchhiking is not an uncommon practice in Israel.  They were picked up – that much is clear.  One of the boys sent an emergency message via his cell phone before it went dead; signals from all three of the boys’ phones were cut off.

It is believed that they wanted to head to the Jerusalem area, but were brought into the area of Hevron.  An incinerated stolen car was found in the Hevron area; there is suspicion that this may have been the car that was used for picking up the boys.

Tonight Prime Minister Netanyahu, after meeting with key security personnel, made a clear and unequivocal statement:

“Our boys were kidnapped by a terrorist organization. There is no doubt about that.”

He said that this is the result of the Fatah-Hamas unity government, and that he held the Palestinian government responsible.

While he did not – certainly would not – elaborate, it is clear that authorities are factoring into their considerations recent demands for the release of Palestinian Arabs from Israeli prisons, and calls by Palestinian Arabs to kidnap Israelis in order to secure prisoners’ release in trade.  I reported very recently on multiple plots that had been hatched by Arabs in prison, calling upon associates on the outside to carry out such kidnappings.

Abbas, speaking for the PA, not only denied any involvement, he offered to be of assistance.  What else could he say at this juncture?  But we can see how the PA assists:

”Fatah and Hamas activists on Saturday called on Palestinian shopkeepers and businessmen in Hebron to destroy any CCTV footage that could be used by the IDF to locate the three missing yeshiva students.

“The activists posted their call on social media networking, especially Facebook and Twitter, after IDF soldiers reportedly confiscated some security cameras from a number of businesses and homes in Hebron as part of the investigation into the circumstances surrounding the disappearance of the students.

“Eyewitnesses said that Fatah activists in Hebron confiscated some security cameras to prevent the IDF from laying its hands on them.” (Emphasis added)

In Gaza, people celebrated the kidnappings by handing out candy.  Hamas criticized Abbas for his offer to help.

There is a massive police and IDF search for the boys underway in both the Gush Etzion area and the Hevron area.  It has been in operation for many hours, and is expected to go on for some time.  There seems to be some concern about the boys being smuggled into Jordan or elsewhere, and so roadblocks have been set up.  As well, people are being taken into custody and questioned intensively.  This is a process that, hopefully, will ultimately shed light on the situation: someone who is interrogated mentions a name, that person is brought in and interrogated….

In synagogues all over Israel, tehillim (psalms) were said for the boys today.  Tonight there was a prayer service for them at the Kotel and elsewhere. 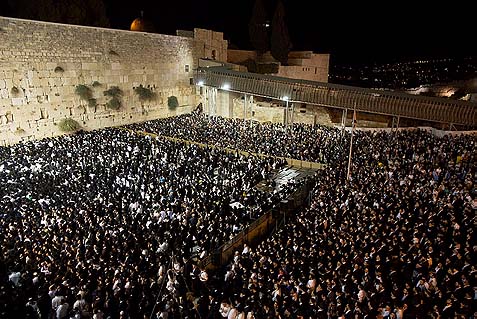 Wherever you are, I ask that you also pray for them:
Eyal ben Iris Teshura

The Temple Mount: Whose Is It?