The Australia Department of Immigration this week cancelled the visa of Richard Williamson, a Catholic 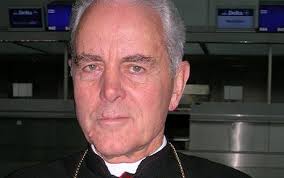 bishop who was scheduled to speak in rural Australia this month.

Bishop Williamson has denied that 6 million Jews died in the Holocaust, the Australian Jewish News reported.

They reported they contacted the Department of Immigration last week to alert them of Williamson’s impending visit.

The British-born Roman Catholic bishop was sacked for his Holocaust denial.

In Feb 2010 the UK Telegraph reported:

The notorious English bishop also allegedly told colleagues from his ultraconservative brotherhood that “a completely new world order” had been built on the “fact” that Jews were systematically gassed in concentration camps such as Auschwitz, Treblinka and Sobibor.

Jews, he added, had become“ersatz saviours thanks to the concentration camps,” according to a report in German news magazine Der Spiegel.

“The fact is that the six million people who were supposedly gassed represent a huge lie,” it is claimed he wrote to fellow members of the Society of St. Pius X.

In a separate email, he is said to have written that “1.3 million deported people” were not gassed in the Treblinka, Majdanek, Belzec and Sobibor concentration camps as historians claim, but were rather transported to the Soviet Union.

Williamson is due to face court in the southern German city of Regensburg on April 16 over allegedly Holocaust-denying remarks he made to Swedish television in January last year.

Denying the Holocaust is a crime in Germany. Williamson was on German soil when he gave the interview, though he claims he never intended his remarks to be broadcast there.

In an interview shown by Swedish TV in 2009, Williamson stated:

“I believe that the historical evidence is strongly against, is hugely against, six million Jews having been deliberately gassed in gas chambers as a deliberate policy of Adolf Hitler.”

He went on to deny the existence of gas chambers and cited evidence by Holocaust revisionists that only 200,000 to 300,000 Jews died in the concentration camps.

The AJN goes on to say:

The AJN saying, “The individual’s visa has been cancelled,” and noting that the minister was “appreciative” of the newspaper drawing his attention to the matter.

The Executive Council of Australian Jewry (ECAJ) also contacted the Department of Immigration last week. Noting Williamson’s views and past, ECAJ urged that he be banned from the country in line with legislation that allows the minister to refuse or cancel a visa on character grounds, having regard to the person’s past criminal record or if there is a significant risk that during that person’s visit he or she would vilify a segment of the Australian community.

Welcoming the government’s decision, ECAJ executive director Peter Wertheim said, “The Minister seems to have drawn the correct conclusion that if Williamson were to be allowed into Australia there is a significant risk he would vilify the Jewish community.”

Describing the Minister’s decision as “a welcome affirmation that [Williamson’s] vile and hateful ideas will not be tolerated in Australia”, B’nai B’rith Anti-Defamation Commission chair Dr Dvir Abramovich added, “I am dismayed that any church or religious group in Australia would embrace a Holocaust denier and give legitimacy to his disgraceful lies.”

It is not clear whether Williamson’s visit was sanctioned by the Catholic Church in Australia, but a spokesperson for Archbishop Christopher Prowse, who is Consultor to the Holy See’s Commission for Religious Relations with the Jews, confirmed that the Canberra-based archbishop had no knowledge of the planned visit.

I am beyond appalled to find this whilst looking for information. The Daily Stormer

“Bishop Williamson Denied Entry to Australia Because He Denied the Jewocaust”

The great and powerful Bishop Williamson, one of the last true representatives of the Roman Catholic faith, has had his Australian visa revoked after a group of conniving Jewish rats tattle-tailed on him to the Australian government for denying their idiot hoax.

The only thing worse than magically causing 6 quadrillion invisible Jews to disappear is to question the plausibility of this magical occurrence.

He then quotes the AJN, plus he embedded the video I was looking for which I saw a while ago.

If you don’t want to be ill, DO NOT read the comments

“Here’s the original interview where the Great Bishop called out the filthy rats on their stupid gas lies.”

Published on Oct 31st. 2012.
This interview took place in the summer of 2010, whilst Williamson was under an order of silence from the head of the Catholic SSPX Order, Bishop Fellay.
He was expelled from the Order in October of that year, which made it possible for this video to be released.

It has created somewhat of a crisis for the Order, as they now have to face the fact that the teaching of the staunchest defender of the principles on which the order was founded is no longer acceptable to its teaching.
The utterly disgusting fact is that many within the order and laity believe that principle has been sacrificed in order to ‘mainstream’ the Judaised Catholic Church and turned against the commands of the society’s founder..
UNBELIEVABLE!

This is interesting and it goes to show what the Catholic Church thinks  of Jews and Judaism by Pope Benedict XVI ‘s actions.

Together with Fellay and two other bishops, Williamson was unlawfully consecrated by Archbishop Marcel Lefebvre in 1988 and automatically excommunicated. Pope Benedict XVI lifted their excommunications in 2009, but Williamson remains suspended from the exercise of the episcopal order on account of his denial of the extent of the Holocaust. Read more here: