News & Views from ‘Arlene in Israel’ – A Done Deal of Sorts.

In spite of well-founded predictions that this would never happen, a Fatah-Hamas unity government was sworn in today in Ramallah, to much fanfare.  It is to be headed by Prime Minister Rami Hamdallah , former president of An-Najah National University in Nablus, who had been appointed by Abbas.
Under this new arrangement, the areas of Judea and Samaria administered by the PA and Gaza will be governed by the same political entity. There are, as I understand it, 17 ministers, five of them from Hamas.

You can see the listing of the members of the government here: http://www.maannews.net/eng/ViewDetails.aspx?ID=3D701510

Some are new appointments, but eight people retain the positions they previously had.

One of the primary goals of this new government is the supervision of elections, which are slated for 2015.  Do not expect this to go smoothly.
~~~~~~~~~~

This is the first unity government between the two major Palestinian Arab factions to be established in seven years.  That is when Hamas, after winning PA elections, violently wrested control of Gaza and established a separate polity there. Several attempts at reconciliation in the interim failed.

Even today, at the very last moment, it looked as if things would fall apart because Hamas suddenly insisted on a ministry and minister for prisoner affairs.  But the PA was treading carefully on this because of intimations that the US frowned upon this ministry.  Abbas had said a separate agency that was not part of the government might be established.  In the end, a compromise was reached in which there would still be a ministry, but no minister would be appointed – the ministry would be under the direct supervision of Hamdallah.

Hamdallah for his part had said earlier that the prisoner issue was a top priority and that the Prisoners Law would continue to be implemented.

I wish to be very clear about this: the law provides salaries to terrorists in Israeli prisons, with the level of salary calibrated to the severity of the crime. The Palestinian Media Watch has been doing battle with the State Department on this matter. For State continues to make reference to the need to provide support for the families of those in prison (thereby representing this as a welfare law of some humanitarian dimensions).  PMW has documented, however, that the payment is to the prisoners.

The US government would, understandably, be defensive about this. For the “terrorist salaries” have been drawn from the PA’s general budget, which means from monies donated to the PA.  Many tens of millions in US funds (US taxpayer funds) go to the PA, with some of this – estimated at $46 million  – used for the prisoners.

The support for the prisoners is a major issue for the Palestinian Arabs, for they see these people as “martyrs,” heroes who fought for their cause.  Which tells us a great deal.
~~~~~~~~~~

The Shin Bet has revealed that it has blocked 11 different attempts to kidnap Israelis – both soldiers and private citizens – that were orchestrated from inside Israeli prisons.

The prisoners, who were members of Hamas, Fatah, and other Islamic organizations, were in communication with terrorists on the outside, who were instructed to activate the kidnappings. The goal was to force trades that would secure the release of the prisoners who had instigated the kidnappings.

There are dozens of other reasons not to release terrorists in prison, but this alone is sufficient reason.  No terrorist in an Israeli prison should believe that his release can be assured in this fashion.
~~~~~~~~~~
A bill was being promoted – by MK Ayelet Shaked (Habayit Hayehudi) and MK David Tzur (Hatnua) – that would give judges the option during sentencing (primarily sentencing of terrorists, although this is not specified) of blocking any possibility of future early pardon. This was designed to prevent release of terrorists for political reasons.  It would, said Shaked, restore a modicum of sanity to the country.  Indeed.  Coalition head MK Yariv Levin (Likud) and Yisrael Beiteinu faction leader Robert Ilatov (Yisrael Beitenur faction head) were among those who also signed on to the proposal. 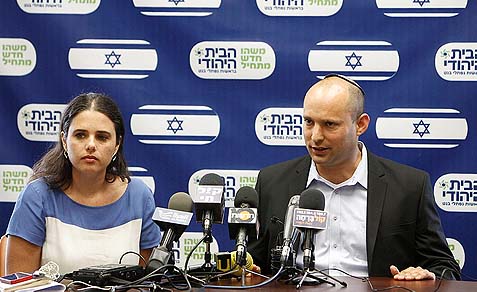 But Prime Minister Netanyahu blocked the vote, according to various reports thereby incurring considerable anger on the part of Naftali Bennett (head of Habayit Hayehudi). Then Netanyahu said it will be considered by the Security Cabinet instead, which apparently mollified Bennett somewhat. And I?  I throw up my hands.  The political machinations are more complex than anything I wish to discuss in detail here.

What I will note is that Attorney General Yehuda Weinstein had a role in this, which should surprise no one.

What is so incredible is that this law would apply only to future sentencing (those now in prison could still be pardoned for political reasons), and yet this caused political tensions.
~~~~~~~~~~

Returning to the matter of the new unity government…

It came as a surprise that Hamas prime minister Ismail Haniyeh and his cabinet have resigned, thereby making way for the new unity government.  Originally, he had said he would insist on maintaining control.

Abbas, meanwhile, has declared that the new government would be established on the “Palestinian principles” of “recognizing Israel, recognizing the terms of international agreements, and the explicit rejection of violence and terrorism.”

This is a sick joke.  A ploy. I have referred in the past to fancy political footwork, and that’s what we’re seeing. Hamas ostensibly withdraws to the background and Abbas says,

Not if Hamas is part of that government, they’re not.  And that’s without even considering the fact that Fatah, as the PA, has itself never explicitly rejected violence.

My concern is that the international community will find it convenient to buy into this ruse and again pressure Israel to negotiate or otherwise offer cooperation.  Israel has said that there will be no negotiations with a government that includes Hamas.  The US government is supporting this position, for the moment. But Kerry, while expressing concern about Hamas, has had communication with Abbas and will be meeting with him.

He is saying the US will not accept the unity government “initially.”  Not encouraging. He’s saying, “Convince me, guys.”

If there is any good news with regard to US involvement in “peace negotiations,” it is that Obama gave a major foreign policy speech without mentioning this.  And there is talk about cutting US support for the new unity government – but this comes from Congress and not the White House or State Department.

Most news sources I’m seeing are saying that Netanyahu has declared he will hold the PA responsible for any rocket fire from Gaza, now that there is only one government.  But there is much more to it than this.

Over the past several years, Israel – even while aware of the stockpiling of rockets in Gaza – maintained a policy of “quiet for quiet” (Hamas doesn’t launch those rockets and Israel refrains from attacking Hamas – a policy I always thought was bananas).  Now, however, there is a different scenario in play:

According to the Guardian, Intelligence Minister Yuval Steinitz is insisting on the record that Abbas now had an obligation as part of the Oslo agreement, to demilitarize Gaza.

(For the record, Interim Agreement of 1995, Chapter 2, Article XIV 4 outlines what weapons are permitted for the PA police, etc. and rockets are not included. See: http://imra.org.il/story.php3?id=63724)

And Netanyahu is quoted as saying, “Enough of these tricks. If this new Palestinian government has regained sovereignty over Gaza the first thing that Abbas should do is announce he is starting demilitarization of Gaza.”

But that is not exactly what the Security Cabinet has now said: http://imra.org.il/story.php3?id=63959.  The issue of Abbas’s obligation to remove rockets from Gaza is skirted.