Apartheid is a word meaning “the state of being apart”, literally “apart hood”, and was a system of racial segregation in South Africa, introduced by the South African Government from 1948 to 1994, in which the majority black inhabitants had little or no rights. Apartheid was also practised  in South West Africa,  administered by South Africa, until independence as Namibia in 1990.

3.5 million non-white South Africans were forced from their homes into segregated neighbourhoods. They were denied political representation and in 1970 were deprived of their citizenship. They become citizens of tribally based self-governing homelands. Four of which became, to a small degree, independent states.

Every element of their lives was segregation. Education. Medical care. Beaches etc. The black people were provided with services far inferior to those of white people. Even vehicles and services were segregated by race, even if equal facilities were not made available to all races.

During the 1960s, 70s and early 80s, the government introduced a policy of “resettlement”, to force people to move to their designated “group areas”. The most well-known was in the 1950s in Johannesburg, when 60,000 people were moved to the new township of Soweto.

The government also passed legislation that became known as ‘Petty apartheid’, which banned mixed marriages between whites and people of other races. Then an amendment to the Act forbade “unlawful racial intercourse” and “any immoral or indecent act” between a white and an African, Indian or coloured person.

Apartheid began initially under Dutch rule in colonial times, when people were classified into four racial groups, “black”, “white”, “coloured” and “Indian”. Indians and coloureds were divided further. Residential areas were also segregated.  The ‘Coloured’ group being of mixed descent, many were descended from people brought to South Africa from other parts of the world as slaves.

For political reasons, the classification of “honorary white” was granted to immigrants from countries which South Africa had diplomatic and economic relations and to their descendants.

‘Coloureds’ were forced to live in separate townships, many leaving homes their families had occupied for generations. They received an inferior education, though better than that provided to Blacks.

Voting rights were denied to ‘Coloureds’ in the same way that they were denied to Blacks but in 1977 this was changed. The idea was that the ‘Coloured’ minority could be granted voting rights, but the Black majority were to become citizens of independent homelands. These separate arrangements continued until the abolition of apartheid.

Blacks were not allowed to run businesses or professional practices in areas designated as “white South Africa” unless they had a permit. They were required to move to the black “homelands” and set up businesses and practices there.

National Party leaders argued that South Africa did not comprise a single nation, but was made up of four distinct racial groups: white, black, coloured and Indian. These groups were split into 13 nations or racial federations. White people encompassed the English and Afrikaans language groups; the black populace was divided into ten such groups.

Transport and civil facilities were segregated. Black buses stopped at black bus stops and white buses at white ones. 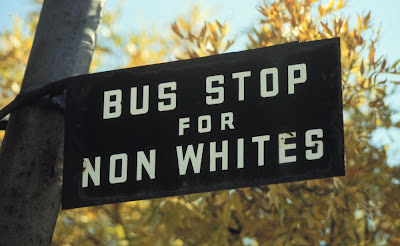 I have my own little story here, which sticks clearly in my mind to this day. I went on a school excursion to the Motor Show in London, there I  heard a word and way of life I knew nothing about.

That’s when I saw it. A bus! Not just any old bus. A bus with beautiful plush seating at the front, with wooden benches at the back, divided by a metal grille.

I asked the teacher if it was for prisoners. She told me it was a bus for export to South Africa. I further questioned “But is it for prisoners?”

It was then she explained Apartheid to me. I remember crying and being horrified. The very fact that it is so clear still in my head shows what an effect it had on me.

Trains, hospitals and ambulances were segregated. The numbers of white patients were fewer, with white doctors preferring to work in white hospitals. These conditions  were much better than those in often overcrowded and understaffed black hospitals.

Blacks were excluded from living or working in white areas, unless they had a pass issued only to  blacks with approved work. Spouses and children had to be left behind in black homelands. A person without a valid pass was subject to arrest and trial for being an illegal migrant, which was generally followed by deportation to their ‘homeland’ and their employer prosecuted for employing an illegal migrant. Police vans patrolled white areas to round up blacks without passes. Blacks were not allowed to employ whites in white South Africa.

Even Trade unions under apartheid were racially segregated.

The State spent ten times more per child on the education of white children than black which included separate universities .

Blacks were not allowed to buy hard liquor and could only buy a poor quality beer.

Cinemas and theatres in white areas were not allowed to admit blacks.

Most restaurants and hotels in white areas were not allowed to admit blacks except as staff.

Blacks were prohibited from attending white churches but this was never rigidly enforced and churches were one of the few places races could mix without the interference of the law.

Blacks paid tax on earnings on a much lower wage than whites.

Blacks could never buy land in white areas. In the Black areas, most of the land belonged to a “tribe”, where the local chieftain would decide how the land had to be used. As a result of this whites owned almost all the industrial and agricultural lands and much of the prized residential land.

There is more, so much more. When I started researching this subject I thought I knew what apartheid was. BOY!!! Were my eyes opened.   Apartheid legislation

Let’s have a look now at Israel, which the Leftists would have us believe is an “Apartheid State”.

How on earth they can come to a conclusion like that is beyond my comprehension.

The Arab population of Israel has had the right to vote since the Declaration of the State of Israel, consequently since the first Parliament in 1949, there have always been Arab MKs (MPs), where  it was confirmed that Hebrew and Arabic were  the official languages of Israel.

Clearly there was no apartheid from day one.

As of 2011, 13 of the 120 members of the Israeli Parliament are Arabs, most representing Arab political parties.

The difference between the Israeli situation and apartheid South Africa is very different in every possible way.

There are no separate doctors, nurses, dentists, teachers, schools etc. for Israelis and Arabs.

Israeli and Arab babies are born in the same delivery room, with the same facilities, attended by the same doctors and nurses, with the mothers recovering in adjoining beds in a ward. A friend had major surgery in a Jerusalem hospital: the surgeon was Jewish, the anaesthetist was Arab, the doctors and nurses who looked after him were Israelis and Arabs.

Israelis and Arabs share meals in restaurants and travel on the same trains, buses and taxis, and visit each others homes.

None of this could have happened under apartheid.

You see Arabs wherever you go on the beach, in the shopping centres, strolling the streets.

There are Arabs in all walks of life including the highest Judges and soldiers in the land. The Deputy Speaker of the Knesset in an Arab.

A comprehensive list can be found here at Wikipedia

Last year’s winner of the voice was an Arab, Miss Israel was/is an Ethiopian, the runner up on Master chef was an Arab. The winner of a well know talent show this is year an Arab.

None of this would have happened under apartheid.

Here’s an interesting link   Arabs Are Prominent in Israel’s Government
There are Arab parliamentarians, judges, diplomats, and IDF generals.
A huge difference between Israel and South Africa is that Arabs have the right to vote. Blacks did not. The vote means citizenship and power to change.

20% of the students at Haifa University are Arabs. I personally was amazed to see the number of girls wearing hijabs at Tel Aviv University.

If Israel was an Apartheid State, why do polls continually show that Arabs in Israel don’t want to move to the West Bank or Gaza if a Palestinian state is created there.?

In a survey conducted among 1,000 residents of Um Al-Fahm, 83% of respondents opposed the idea of transferring their city to Palestinian jurisdiction, while 11 percent supported the proposal and 6 percent did not express their position.

Of those opposed, 54% said that they were against becoming part of a Palestinian state because they wanted to continue living under a democratic regime and enjoying a good standard of living.

No where do you see the separation of public facilities in Israel such as benches, toilets, and even train carriages as was the case in South Africa.

“I went back to Israel last summer as I do regularly, and visited Hebron, deep in the West Bank. As I strolled along the seafront between Jaffa and Tel Aviv, I could not help but notice Muslim, Christian and Jewish Israelis alike, all barbequing, playing on the beach, and wading out into the Mediterranean right next to each other. In South Africa, even the beaches were segregated. There were no separate benches or toilets for Muslims, and the new tram in Jerusalem did not have different sections for different ethnicities or religions in it – but it did display place names in both Arabic and Hebrew as is the case in all of Israel. As citizens, Arab-Israelis have exactly the same rights as all other Israelis do, and have 12 Members of the Knesset, Israel’s parliament, representing them. Arab-Israelis have also had representatives in the cabinet, worked in the civilservice, and served in the army. It was a Christian Palestinian Supreme Court judge, George Karra, who sentenced Moshe Katsav, a former Israeli President, to a jail term in 2010. So much for a “racist” state.”

“Muhammad Zoabi, 16, an Arab Muslim from Nazareth, is causing anger in Muslim circles, and considerable joy in Jewish ones, by stating in a unique interview that he is a Zionist and loves the state of Israel.

“I really believe that I’m a lucky Arab and a lucky human being and a lucky Middle Eastern[er] that I was born in this little tiny piece of land!”, he stated. Pointing to the Golan Heights from the window of his interviewer’s home, in the Israeli community of Massad, he noted how bad life is beyond the border, for Syrians.”

Important update as of September 2014, Muhammad Zoabi has been given asylum in other country (name withheld for security reason) due to kidnap attempts and death threats from fellow Arabs who do not like or approve of his views on Israel.