News & Views from ‘Arlene in Israel’ – Just Call Me Dubious

Written and submitted by Arlene Kushner.

When last I wrote, I said I would be watching for the US response to the Israeli capture of the ship – operated under Iranian direction – that was carrying rockets intended for Gaza. As it turns out, besides the boiler plate response we might have expected, there was something else:

A State Department spokesperson put out a statement suggesting that the US was prepared to act to take this ship before Israel made its move.  “The White House directed the Department of Defense to monitor the vessel,” Jen Psaki said.  In fact, the US was prepared to take “unilateral steps” to stop the ship, but then Israel “volunteered” to handle the situation and the US stepped back.

A logical analysis renders this description of the situation ludicrous.  First, the US does not track Iranian weapons ships as Israel does: this particular operation required months of exceedingly sensitive covert action and special intelligence. We are the masters at this.

And then, why would Obama want to have the US intercept such a ship, thereby angering the Iranians – a report described the Revolutionary Guard as furious – when he is in difficult negotiations with them?  The president’s MO is appeasement, not confrontation. You may remember that it was revealed after the fact that the reason Obama halted a planned missile hit on Syria was because Iran requested he not do it.

Lastly, if, for reasons that are not immediately clear, Obama had wanted to stop that ship, what are the chances that he would have opted to then step back and let Israel do it?

And so, as you can readily see, I was exceedingly dubious about this story from the moment I read it.

And then – surprise! – I found this (emphasis added):

“Asked about US involvement in the commando attack, the [senior IDF] officer said that the US was informed of the relevant details ahead of the raid, but did not take an active part in collecting information that led up to it.”

So the US hadn’t even taken part in collecting information about the ship, never mind having set in place plans to stop it.  This means, of course, that at some high level (presumably the very highest) in the State Department, a decision was made to misrepresent US involvement in the situation.

Shocking?  Not at all..just part of the State Department MO.  Remember Benghazi and the claim that a US ambassador was murdered because of a video making fun of Mohammad.

I will not belabor the question of why this was done, other than to speculate that they didn’t want to appear as if they were not part of what was going on – that they were, so to speak, one-upped by Israel.  This claim, if believed, would have served to diminish Israel, which in point of fact acted superbly.

As to a boiler plate response on this, White House press secretary Jay Carney made it clear that from the US perspective it was entirely “appropriate” to continue negotiations in spite of what went on with the ship.  There is no rethinking of the parameters of the negotiations taking place. 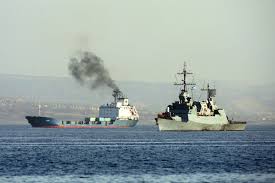 The weapons cargo ship, the Klos C (on left ), escorted by two the Israeli Navy ships INS Hanit and INS Hetz, was brought into the port at Eilat on Saturday.

Its contents, when unloaded by Yahalom, an engineering unit for special operations, were found to consist of:

The full import of these weapons was explained by an IDF official (emphasis added):

“There are rockets in this shipment with a 160 kilometer range. If you do the math, they could reach Haifa. These are new rockets that threaten the majority of Israeli citizens. It is not right to simply say, ‘There are so many rockets in Gaza, what would a few more matter?’ These are a lot of rockets, with longer ranges and with bigger warheads. A missile like this in the hands of Hamas or Islamic Jihad gives them strategic capability.”

The  17 crew members of the Kos C are being questioned on board the ship and then will be free to leave with the ship.

A major press conference was held today in Eilat, attended by international press and foreign dignitaries who will have an opportunity to see the weaponry.  One of Netanyahu’s goals was showing the world “the true face of Iran”: today Tehran hides shipments of long range missiles, tomorrow it will hide “nuclear suitcases.”

Unfortunately, there is no evidence that the world is interested in seeing it.

Netanyahu challenged Catherine Ashton, EU foreign policy chief – as she was preparing to go to Iran on Sunday – to directly confront the Iranians on the matter of the Kos C.  He might have saved his breath. Ashton, who made the trip at the invitation of Iranian Foreign Minister Mohammad Jarad Zarif, delivered the following statement (emphasis added):

“I have come to Iran with the message of goodwill of 28 European countries…this is a start for the development of cooperation between Iran and the EU.

“The EU fully acknowledges the Islamic Republic of Iran’s importance and role in the region; accordingly, talks have taken place during this trip for cooperation between the two sides on different issues.”

Assuming that this report from the Fars News Agency about Ashton’s statement is true, then I would say she has surpassed herself.  Talk about inexcusable pandering!  That she entered Iran on the heels of the capture of weaponry intended by Iran for use against Israel by terrorists and then spoke about the goodwill of 28 EU countries is vile.

So confident is Iran that it has the upper hand now, that after meeting with Ashton, Iranian politician Ali Akbar Velayati criticized the US policy towards Iran:

“The measures adopted by American officials under the pretext of pressure from the Zionists [Israel] are not acceptable,  Such actions by the Americans serve as an obstacle in the way of an international agreement between the P5+1 and the Islamic Republic.”

I have written extensively about the horrendous negotiating situation between P5+1 and Iran.  Iran has been cut all sorts of slack with regard to the “right” to enrich, while sanctions have been cut back so that it is no longer hurting economically as it had been.

This is for an “interim” period, during which a final agreement is supposed to be hammered out. The chances that the end result will be an arrangement that deprives Iran of the capacity to produce a nuclear weapon is close to nil.   Even Ashton, who is kissing up to the Iranians, has admitted that there are no guarantees that a successful deal will be reached.  And this is “successful” in EU terms.  A final agreement, she said, will be “difficult, challenging and there is no guarantee that we will succeed.”

The claim that the sanctions can be reinstated if things don’t work out is fallacious.  The entire sanctions network against Iran is falling apart, with nations and companies running to do business with the Iranians.

Behrouz Kamalvandi, spokesman for the Atomic Energy Organization of Iran, recently gave an interview on Iranian TV in which he said that in the Joint Plan of Action, signed in November. Iran “got more than it gave,” and that Iran’s nuclear commitments were “temporary and non-obligatory.” He emphasized that, “The commitments made by Iran can be retracted.” (Emphasis added)

See Kamalvandi in this MEMRI clip:

With regard to negotiations with the Palestinian Arabs, Prime Minister Netanyahu is conducting himself in a manner that is increasingly maddening and bewildering. Precisely what is the man talking about? I frequently want to ask (and I will come back to that in my next post).

Yet at one and the same time, he is on the mark with regard to his warnings about Iran.  His statements and policies in this respect demonstrate a good measure of clear thinking and readiness to confront hard truths.

I believe that anyone who does confront those hard truths, and takes a serious and painful look at the situation, will ineluctably arrive at the conclusion that Iran must be hit. Nothing else will prevent its rush to achieve nuclear capability.

What I fervently pray, then, is that at some point soon, our prime minister stops sounding those warning that are not heeded by the world, and gives the word for the only action that can made a difference.

If it is reproduced and emphasis is added, the fact that it has been added must be noted.
http://arlenefromisrael.squarespace.com/current-postings/2014/3/10/march-10-2014-just-call-me-dubious.html

The Temple Mount: Whose Is It?