Boycotted Israeli embraced by other fellows.

A HEBREW University political scientist whose initial bid for a fellowship application was rejected as part of a boycott against Israel has arrived in Australia expressing outrage at the action taken by Sydney academic Jake Lynch.

Dan Avnon this week took up a Sir Zelman Cowen scholarship at Sydney University’s Institute for Democracy and Human Rights, after Professor Lynch, who heads the university’s Centre for Peace and Conflict Studies, turned him down. The move sparked an explosive academic stoush and an international court battle.

In an exclusive interview, Professor Avnon broke his silence to tell The Australian he believed Professor Lynch deserves a “red card” for refusing to sponsor him because the Sydney academic supported the international Boycott, Divestment and Sanctions campaign against Israel.

“The fact that academics at the University of Sydney have rallied to my cause doesn’t diminish the severity of Lynch’s attempt to boycott me as a Jewish Israeli academic,” Professor Avnon said. 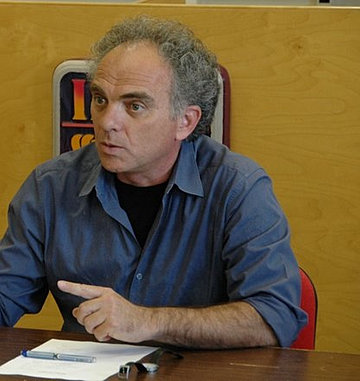 While here, Professor Avnon will deliver lectures on “how to overcome past differences” in divided societies, including his own celebrated program teaching a common civics curriculum to Israeli high school students from Arab, secular Jewish and religious Jewish backgrounds under the same roof. Professor Avnon said he had been given a warm welcome by Sydney University academics appalled at Professor Lynch’s actions, along with ordinary Australians who had written emails of support.

“The Australians have been a light unto the nations,” Professor Avnon said, using the classical expression from the Book of Isaiah.

He said Professor Lynch deserved to be sanctioned for boycotting him, describing it as against the principles of academic freedom and exchange, and ignoring the work he had done to try to achieve a degree of understanding between young Jews and Arabs.

Professor Avnon said he would not get involved in the racial discrimination case launched by Israeli anti-BDS legal group Shurat HaDin against Professor Lynch, now before the Federal Court.

Professor Lynch is defending the case and has denied any suggestion his decision to block Professor Avnon’s application was because of his race.

Professor Avnon revealed that even though his experience in being boycotted by Professor Lynch formed the main thrust of Shurat HaDin’s case, the Israeli group had not approached him to be a witness and he had had no contact with it.

He said that if Shurat HaDin won the case, and Professor Lynch were forced to renounce BDS and apologise, “I would certainly be pleased.”

According to Professor Avnon, Professor Lynch’s approach to his request for sponsorship reflected the “dishonesty” of the BDS campaign as a whole, which claimed to promote Palestinian rights against alleged Israeli transgressions.

Professor Avnon said that, rather than treat him as an individual academic and find out what his beliefs, values and work entailed, Professor Lynch had treated him as a faceless symbol of Israel, and not discussed his sponsorship application beyond a letter rejecting it.

“The head of a centre of peace and conflict studies can’t take the time to engage with me because I represent some objectionable experience? That represents the worst of BDS,” Professor Avnon said.

“The fact that I am an unwitting pawn (in Professor Lynch’s BDS campaign), how ridiculous, how unfair, how blind this person is to the individuality of us.”

Several prominent Australian Jewish academics, while most of them oppose BDS, have supported Professor Lynch’s right to express his opinions.

Professor Avnon said that as an individual Professor Lynch did have such a right, but as the head of an academic institution he had allowed his own partisan political views to interfere with the universal academic principle of free exchange of knowledge.

“Science is beyond boundaries,” he said.

“Professor Dan Avnon asked me for a favour,”

“I declined, citing our boycott policy. It had nothing to do with his race, and to suggest that to be the case is completely false and a libellous smear.

“The outcome would have been exactly the same if an Israeli Arab applicant for a Sir Zelman Cowen fellowship had contacted me. It is the fellowship scheme to which I object, as an institutional link with an Israeli university, and with which I refuse to collaborate, on principle. I have reached the same conclusions as a rapidly growing number of other academics around the world who will no longer tolerate Israeli militarism and lawlessness, and the complicity in it of Israeli universities.”

Professor Avnon described himself as a liberal within the Israeli political spectrum who was devoted to “using education to overcome certain undemocratic practices in Israel”.

For several years Professor Avnon ran the high school civics program he developed and implemented at the Gilo Centre at the Hebrew University, which always had a Jewish teacher and an Arab teacher in the class.

Read more about this and Shurat HaDin.

Here’s some background on this for non-Aussies. I recommend the one with the asterisk by Geoff Pahoff.

The Enemy Within: Antisemitism on Israeli Campus

Once common only at U.S. and European universities, Israeli higher education institutions have now become …