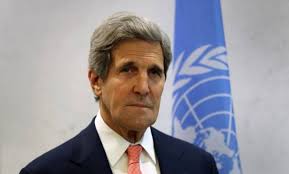 US Secretary of State John Kerry has missed his own deadline of 31 January by not releasing his eagerly anticipated framework agreement designed to help end the 130 years old Jewish-Arab conflict. It will now be released by 21 February according to US Envoy Martin Indyk.

Whilst speculation is rife as to its contents – it appears certain that there will be one crucial omission – that any Palestinian State created must be democratic – which could doom any further negotiations.

A democratic Palestinian state finds its genesis in the 2003 Bush Roadmap – the foundation which underpins the current negotiations. The Roadmap stated:

“A two state solution to the Israeli-Palestinian conflict will only be achieved … through Israel’s readiness to do what is necessary for a democratic Palestinian state to be established,

“A settlement, negotiated between the parties, will result in the emergence of an independent, democratic, and viable Palestinian state living side by side in peace and security with Israel and its other neighbours.”

The full text of the Roadmap was presented to Palestinian and Israeli leaders by the Quartet mediators – the United Nations, European Union, United States and Russia – indicating strong international support for a democratic Palestinian State as the end game to success.

By 27 November 2007 – when negotiations under the Bush Road Map were non-existent – President Bush assembled the following star-studded list representing their designated countries and organisations to announce that negotiations were set to commence in December:

They all heard President Bush state the following:

… Today, Palestinians and Israelis each understand that helping the other to realize their aspirations is key to realizing their own aspirations — and both require an independent, democratic, viable Palestinian state…

No democratic State – no solution.

By 19 May 2011 Bush’s successor – President Obama – had started to vacillate:

“The Palestinian people must have the right to govern themselves, and reach their full potential, in a sovereign and contiguous state.”

If Obama and the Annapolis participants have conveniently forgotten that creating a  “democratic Palestinian State” is fundamental to the conflict being ended – then they only have themselves to blame for the chaos and violence that will surely follow should Israel refuse to negotiate within a Kerry framework agreement that omits any reference to a democratic Palestinian State.

International treachery and duplicity would surely have triumphed over international diploma

Previous Open Letter to John Kerry
Next Into the Fray: My prediction – coming true with chilling precision