CANCELLED -“People, Book, Land – The 3,500 Year Relationship of the Jewish People and the Land of Israel” added update

Yet another organisation that is part of the ineffective, racist, antisemitic organisation known as the ‘United Nations’  has bowed down to Arab demands.

This time UNESCO – United Nations Educational, Scientific and Cultural Organisation, it appears, is trying to hide the 3,500 or so history of Israel from the world, as if it never existed.

With no advance warning UNESCO pulled the Jewish exhibit two years in the planning and making, entitled “People, Book, Land – The 3,500 Year Relationship of the Jewish People and the Land of Israel,” after a last minute protest from the Arab League.

The exhibit, was created by the Simon Wiesenthal Center (SWC) together with UNESCO and  was scheduled to open on January 20th, 2014, at UNESCO’s Paris headquarters. The invitations had been sent out and exhibition was already in place. The display was co-sponsored by Israel, Canada and Montenegro.

Rabbi Marvin Hier, Dean of the Simon Wiesenthal Centre, told The Algemeiner that the move was an “absolute outrage.”

“The Arabs,” he said, “don’t want the world to know that the Jews have a 3,500-year relationship to the Land of Israel.”

Hier said that his organization, which is accredited by UNESCO as an NGO, worked in intimate co-operation with the international body on the project, which his center initiated after the Palestinian Authority was unilaterally accepted as a UNESCO member state in 2011.

“We made a clear attempt to work with them and the system, they can’t say they were blindsided, they commented on every sentence (in the exhibit’s materials) and still, in the end, the Arabs protested and they kicked us out.”

UNESCO informed the SWC of the change on January 14th in a letter to the Center’s Shimon Samuels, asserting the Arab League’s claim that going ahead with the show

“could create potential obstacles related to the peace process in the Middle East.”

In a letter to Irina Bokova, president of UNESCO, President of the Arab group within UNESCO, Abdulla al Neaimi, from the United Arab Emirates, expressed “deep worry and great disapproval” over the program showing the age old connection between Israel and the Jewish people.

“The subject of this exhibition is highly political though the appearance of the title seems to be  trivial. Most serious is the defense of this theme which is one of the reasons used by the opponents of peace within Israel,”

“The publicity that will accompany… the exhibit can only cause damage to the peace negotiations presently occurring, and the constant effort of Secretary of State John Kerry, and the neutrality and objectivity of UNESCO.”

“For all these reasons, for the major worry not to damage UNESCO in its… mission of support for peace, the Arab group within UNESCO is asking you to make the decision to cancel this exhibition,” Al Neaimi concluded.

Why isn’t it surprising that the Arab League is opposed to anything that suggests that Jewish sovereignty in the Middle East has any legitimacy. However,  the surprising part is that prior to the Arab League’s objection, the State Department withdrew the US as a sponsor of the exhibition, using language almost identical to that of the Arab League! Here is the US position:

“At this sensitive juncture in the ongoing Middle East peace process, and after thoughtful consideration with review at the highest levels, we have made the decision that the United States will not be able to co-sponsor the current exhibit during its display at UNESCO headquarters,”

wrote Kelly O. Siekman, Director at the Office of UNESCO Affairs of the State Department, in an email seen by The Algemeiner.

Days before the United Nations Educational, Scientific and Cultural Organization was to launch a landmark exhibit at its Paris headquarters this Monday on “The 3,500 Year Relationship of the Jewish People and the Land of Israel,” curated together with the Simon Wiesenthal Center, the world body reneged.

The surprise here isn’t that UNESCO chief Irina Bokova surrendered to the Arab League’s protest, rudely cancelling an event for which invitations were already sent out, and which involved painstaking work over two years by renowned Hebrew University scholar Robert Wistrich.

The surprise is the fact that Bokova ever gave her approval in the first place; and that it took this long for the Arab states to wake up, given that the Wiesenthal Center for over two years had been loud and clear that the exhibit was designed to counteract

“malicious lies being spread, particularly in the Arab world,” and would be shown

“not in a synagogue or Jewish community center, but rather at UNESCO headquarters in Paris and the United Nations where this historic truth [the Jewish connection to Israel] is too often buried under an avalanche of lies.”

UNESCO  was the first UN body, in November 2011, to deem “Palestine” a state — surrender to Arab pressure on this matter was inevitable.

Despite the repeated claims of the Obama Administration that UNESCO is God’s gift to the Jews, and to humanity, the opposite is true: it is arguably the most anti-Jewish body in the entire United Nations.

If the notorious UN Human Rights Council dedicates a full 50 percent of its resolutions to demonizing the Jewish state, at UNESCO the numbers are 100 percent.

That’s right: all of UNESCO’s condemnatory resolutions are against Israel.

Finally, consider the tragedy: founded after World War II with the express purpose of combating the doctrine of the inequality of men and races, UNESCO today has sadly become a serial perpetrator of inequality.

In conclusion:  In its formal response to UNESCO’s Bokova after the suspension of the program, the SWC said,

“we insist that you live up to your responsibilities and commitments as the co-organizer of this exhibition by overturning this naked political move that has no place in an institution whose mandate is defined by education, science, and culture — not politics.”

“Let’s be clear, the Arab Group’s protest is not over any particular content in the exhibition, but rather the very idea of it – that the Jewish people did not come to the Holy Land only after the Nazi Holocaust, but trace their historical and cultural roots in that land for three and a half millennia,” SWC wrote. “If anything will derail hopes for peace and reconciliation among the people of the Middle East, it will be by surrendering to the forces of extremism and torpedoing the opening of this exhibition — jointly vetted and co-organized by UNESCO and the Simon Wiesenthal Center.”

“Madame Director General, we hope you have the courage to do the right thing and we are still looking forward to cutting the ribbon on the exhibition with you next Monday night, January 20, at UNESCO headquarters,” SWC concluded.

In a letter seen by The Algemeiner written in response to the decision, Nimrod Barkan, Ambassador of Israel to International Organizations, recounted the degree to which the SWC co-operated with UNESCO on the project over two years, and blasted the decision.

“This unjust and outrageously last moment decision is biased and discriminative towards Israel. In the past UNESCO hosted numerous events and exhibitions accentuating the relations between Muslim and Christian religions with the Holy Land, and of course it holds and annual ‘Palestine Day,’” he wrote.

WASHINGTON (JTA) — The Obama administration is “deeply disappointed” with a decision by UNESCO, the United Nation’s cultural arm, to cancel the opening of an exhibition on the Jewish presence in the land of Israel and is seeking its placement “as soon as possible.” <<continue reading>>

The Simon Wiesenthal Center will be holding press conferences at 11:00am on Monday, January 20, 2014 in both Paris and Los Angeles.  More information…

Support the Work of the Simon Wiesenthal Center 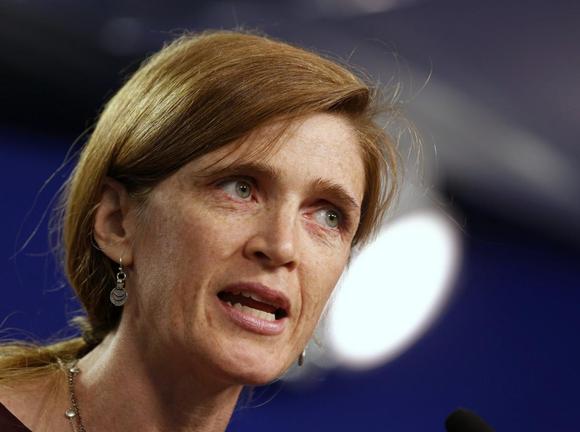 (Reuters) – The United States on Friday criticized UNESCO, the U.N.’s cultural arm, for postponing an exhibition about Jews and the Holy Land due to complaints from Arab member states

The U.N. Educational, Scientific, and Cultural Organization, based in Paris, issued a statement saying it would hold off on the exhibition, which was to be called “People, Book, Land — The 3,500 Year Relationship of the Jewish People to the Holy Land,” because of concerns that some aspects “might be perceived by member states as endangering the peace process.”

The U.S. ambassador to the United Nations, Samantha Power, urged UNESCO to rethink the decision on the exhibition, which UNESCO was organizing in cooperation with the Simon Wiesenthal Center.

“UNESCO’s decision is wrong and should be reversed,” she said in a statement. “The United States has engaged at senior levels to urge UNESCO to allow this exhibit to proceed as soon as possible.”

“UNESCO is supposed to be fostering discussion and interaction between civil society and member states, and organizations such as the Wiesenthal Center have a right to be heard and to contribute to UNESCO’s mission,” Power said.

UNESCO said its secretariat received a letter from 22 states — the Arab Group — expressing their concern that “the planned exhibition could impact negatively on the peace process and current negotiations underway in the Middle East.”

“In this context, regrettably, UNESCO had to postpone the inauguration of the exhibition,” UNESCO said.

Negotiations between Israel and the Palestinians on a “two-state solution” in which Jewish and Palestinian states would exist peacefully side-by-side broke down in 2010 in a dispute over Israeli settlement construction. Peace talks have shown little sign of progress since their revival last year.

The Israeli U.N. mission did not have an immediate reaction.

The Wiesenthal Center said on its website that it would hold a news conference in Paris on Monday to “show the media the exhibition UNESCO didn’t want the world to see.”

The U.S. position within UNESCO has been weakened since it lost the right to vote last year.

The U.N. organization suspended the voting rights of the United States and Israel in November, two years after both countries stopped paying dues to UNESCO to protest its granting full membership to the Palestinians.

The White House has urged U.S. Congress to resume paying dues in order to regain its vote.

Previous News & Views from ‘Arlene in Israel’ – With Twisted Arm
Next Palestine Soccer Team. Sending Out A Few Terrorists to Play Against You in Australia.